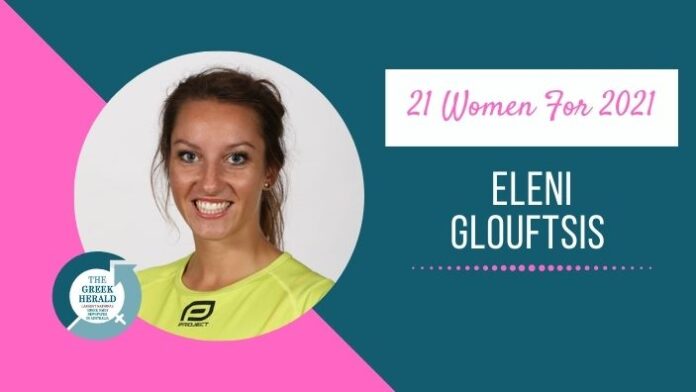 Being the best at her job is the only thing that field umpire Eleni Glouftsis wants in her career, as the Greek Australian continues to break down gender barriers in Australian sport.

A week out before the ninth round of the 2017 AFL season, Glouftsis was told that she would be umpiring the match between Essendon and West Coast on May 21, 2017. On this day, she made AFL history as the first ever female field umpire.

“I just loved football and being part of the game.”

Eleni had been umpiring at an SANFL and VFL level for up to ten years before she finally got her start in the national league. She began in 2008 with the North Eastern Metro Junior Football Association in Adelaide, before umpiring in the South Australian National Football League and becoming the first female to officiate as a field umpire in a SANFL match.

“I grew up next to a football ground and just loved playing the game in primary school and high school and kicking the footy with my dad and my brother,” Glouftsis said.

“An advertisement came up at my local school bulletin about umpiring and I thought, well, I’m a footy and I love keeping fit, I’ll give it a go.”

“Went out to umpire and just fell in love with it. And I was lucky enough to have supportive coaches and peers around me to help that journey make that a lot easier.”

With plenty of social media hype before her first AFL match as a field umpire, Glouftsis said she was grateful to not only her family but the AFL community for rallying behind her.

“It was a pretty crazy week when I try and reflect on it, but a really humbling experience where people were really supportive and reached out. So it gave me confidence going into that game that I had a role to do and I knew how to do it.”

The Greek Australian field umpire also made headlines in July 2019 after she got a heart-warming, ring-shaped surprise on the field following the round 19 match between Carlton and Adelaide.

“That it was a really big surprise. We hadn’t ever umpired an AFL match together. Dillon had been umpiring in the AFL for quite a long time, but obviously I was quite new on the list and so to have our first game together to start with was a really exciting experience, and then to have it topped off with that was just really special,” Glouftsis said.

“It was really important to us in terms of football and umpiring, that’s how we met… it wasn’t really supposed to be as widely viewed as it was in the end, but we were really fortunate to have that experience and have that shared with our family and friends.”

Glouftsis was named South Australia’s Young Person of the Year in 2019 and awarded an Order of Australia Medal (OAM) in 2021 for her service to Australian rules football. A “humbling feeling”, she said this has helped her give back to the AFL community for everything they have done for her.

“I’ve been able to help lots of young people see there are different pathways available to them that we probably haven’t seen before,” the AFL umpire added.

The Greek Australian makes sure AFL games stay calm and orderly, yet everyone knows that the school yard can be the biggest jungle of them all. While working as an umpire on the weekends, Glouftsis works as a high school PDHPE teacher.

“They love the football side of things. It’s a really great way to build relationships, to have conversations with students… it’s a really nice way to kind of have them get to know me as well and be able to share things with them that are relevant to them, but also exciting,” Glouftsis said.