‘A day of reflection’: Canberra’s Greek community commemorate the Battle of Crete 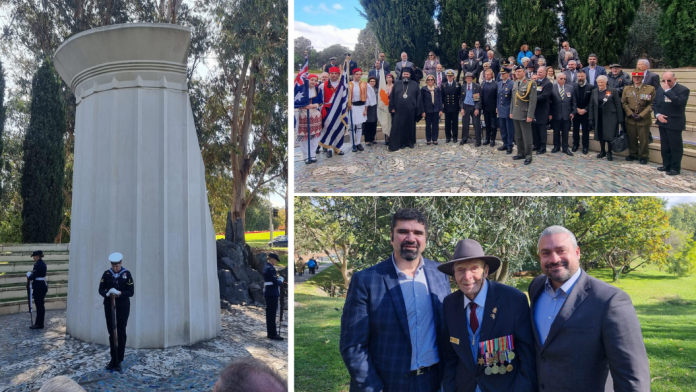 Canberra’s Greek community gathered together this week to commemorate the 81st anniversary of the Battle of Crete with a special event and wreath laying ceremony.

On Tuesday afternoon, a luncheon was organised at the Hellenic Club of Canberra by Dino Nikias on behalf of the Greek Embassy in Australia. The event was held to mark the significant anniversary and to welcome a military delegation from the Greek Armed Forces to the capital city.

The delegation consisted of the Deputy Chief of the Hellenic National Defence General Staff, Vice Admiral Ioannis Drymousis, the Head of the 1st Department Public Relations Directorate Squadron, Colonel (AF) Miltiadis Militsis, and the military attaché from Canberra, Colonel Ioannis Fassianos, among many others.

This luncheon was followed by a memorial service and wreath laying ceremony on Wednesday.

His Grace Bishop Bartholomew of Charioupolis and Reverend Father Petros Kipouros presided over the memorial service at St Nicholas Greek Orthodox Church in Kingston, before the congregation travelled to the Australian Hellenic War Memorial to lay wreaths.

Despite the freezing temperatures, roughly 50 people attended the wreath laying ceremony including a number of dignitaries and members of the Australian armed forces and Hellenic RSL.

On the day, the ceremony lasted close to an hour and members of the Royal Military College played the National Anthems of Greece and Australia, as well as the traditional Last Post.

“It was a day of reflection, commemoration and remembrance,” the President of the GOCCC, Mr Loukadellis, told The Greek Herald after the event.

“It is anniversaries like the Battle of Crete that remind us of the strength, love, respect and relationship between Australia and Greece that make us Greek Australians proud of our heritage, our history and our homeland. Long live Crete!”