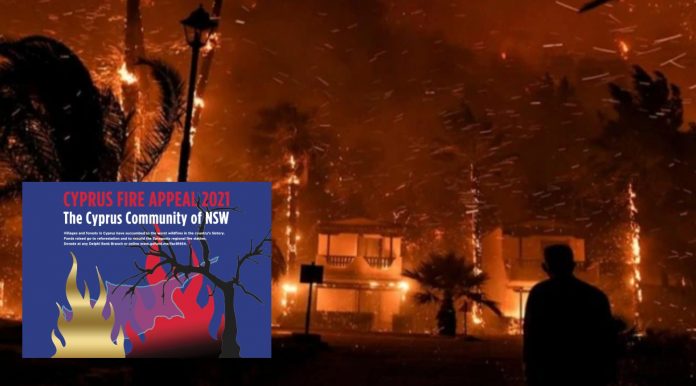 The Cyprus Community of NSW has launched a Fire Appeal to support the victims of the recent wildfires in Cyprus, which became one of the worst natural disasters in the country’s history.

The devastation caused by the fires claimed close to 60 square kilometres of forest land, with the blaze killing four Egyptian labourers, destroying 50 homes, damaging farms and power lines, and forcing the evacuation of 10 villages.

After the outbreak of the fire, Greek Interior Minister, Nicos Nouris, said it was the largest seen on the island since 1974.

“We are experiencing the most destructive fire since the founding of the Cyprus republic in both material damage, but also unfortunately in terms of human lives,” Mr Nouris said.

Speaking to The Greek Herald, Cyprus Community of NSW President Andrew Antoniou said he was devastated to hear about the impact the wildfires have had on the already vulnerable community.

“They’re still dealing with the virus, just like we are. Their economy is really based more so on tourism than anything and that’s been very difficult for them over the last couple of years,” Antoniou said to The Greek Herald.

“So without them having that kind of money flowing in for the economy, anything devastating in nature, really, they won’t be able to find the funds to rebuild as quick as they like.”

Antoniou said the fire appeal funds will go directly to the firefighters and to the councils that have been affected by these devastating fires.

“So then at least it will help them directly rebuild the towns in those areas,” Antoniou said.

The fire appeal has been set up on GoFund Me and can be accessed via this link: https://bit.ly/3inSTQf

“We encourage everyone in the diaspora to donate whatever they can afford, to help our compatriots through this difficult time,” Antoniou said.

“It’s a direct means for those that wanted to support from here, because we are the direct contact between us and Cyprus. That’s part of our duties as a not for profit community club.”

The diaspora in Victoria is also doing their part to help out with the clean up effort, after the Cypriot Community of Melbourne and Victoria also launched a GoFund Me page in an attempt to fundraise for their compatriots.

“The Cyprus Community of Melbourne & Victoria stands hand in hand and supports the victims of the current devastating fires in Cyprus,” the committee wrote on Facebook after launching the fundraiser.