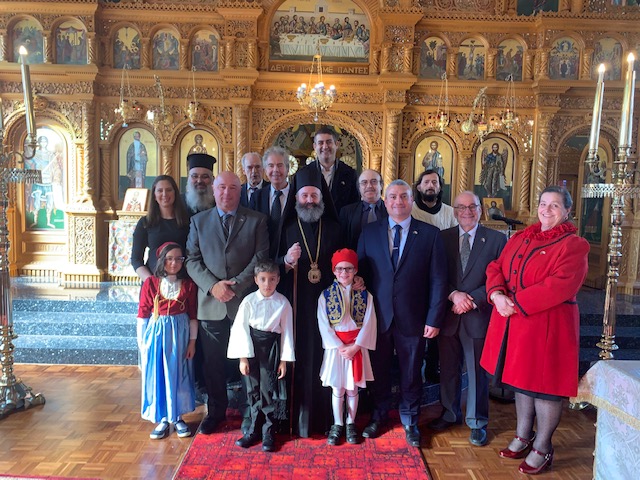 His Eminence Archbishop Makarios made a historic visit to Canberra over the weekend, marking the first time in over two decades an Archbishop has served a liturgy in the local St Nicholas Greek Orthodox Church.

“If I had known, I would have come from the first Sunday I was here in Australia,” His Eminence said in a speech during the liturgy. “Now that I learnt this, I hastened to come.”

Among the dozens of faithful who attended the church service were the Ambassador of Greece to Australia, Mr George Papacostas, the High Commissioner of Cyprus, Mrs Martha Mavrommatis, and the President of the Greek Community of Canberra, Mr John Loukadellis.

Parish priest, Father Petros, was also promoted and recognised by His Eminence during the service as ‘Protopresvytero’ or High Priest.

The historic day was concluded with a luncheon at the Hellenic Club which according to Mr Loukadellis, was a huge success.

“Thank you to everyone who attended and made this such a special day. Thank you to our beloved community for your continued love and support of the Greek Orthodox Community & Church of Canberra committee and our St Nicholas Church,” Mr Loukadellis tells The Greek Herald.

Official opening of the new ‘Meals for the Poor’ initiative in Queanbeyan, Canberra:

During his visit, His Eminence Archbishop Makarios also visited the town of Queanbeyan and officiated a service at the Greek Orthodox Parish of Saint Dimitrios.

This was followed by the official opening of the new ‘Meals for the Poor’ initiative, which aims to support those most in need in the local community.

His Eminence urged the faithful to embrace this new charitable effort of the Church.