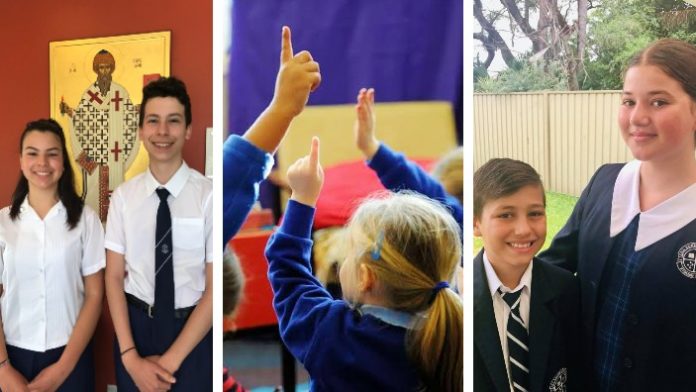 Greek students across New South Wales returned to school on Monday with big smiles on their faces as they finally reunited with their friends and had real-life classroom lessons after over four months in lockdown.

Siblings, Natalie and Evan Mihail, from St Spyridon College in Kingsford, Sydney, were two of these students and they tell The Greek Herald they couldn’t wait to get back to school and reconnect with their friends face-to-face rather than simply over Zoom.

“As I entered the school gates I felt a sense of excitement to be reunited with my fellow peers and teachers,” Evan, who is in Year 8, says.

“I looked forward to every lesson and didn’t want the day to end. Being with my friends and teachers made six hours of a school day seem like not enough.”

Evan’s 16-year-old sister, Natalie, who is in Year 11, agreed and says whilst ‘home schooling was really effective’ she missed her social interactions.

“Home schooling was still really good… I found it really easy to communicate with teachers and even with my peers through media,” Natalie says.

“But being back at the College made me appreciate how beautiful our school is and the family orientated community we have.”

‘The house was quiet’:

It was an entirely different story, with a lot of mixed emotions, for the parents left behind as their children happily re-entered school gates on Monday.

Natalie and Evan’s mum, Gina Mihail, tells The Greek Herald that although she’s pleased they could return to school, she still missed them after spending almost every day with them during home schooling.

“We would go for short walks during break time or have a little bit of a basketball game during their breaks, so I actually really missed that,” Gina explains.

“My husband is working from home as well and my daughter is doing university from home and we felt a bit empty. But no, I’m glad they’re back though. I think it’s good for the children to be back.”

Helen Karavitis feels the same way after she sent her 14-year-old daughter, Karina Giokaris, and 11-year-old son, Vasilis Giokaris, back to All Saints Grammar in Belmore yesterday.

She says home schooling wasn’t bad as the school was ‘so well-prepared,’ but she’s still glad students are allowed back into the classroom to boost their mental health and encourage ‘a sense of normality.’

“The house was quiet. That’s the biggest thing I noticed. But I was really excited for them and they got up really early to get prepared,” Helen says with a laugh.

“I know it’s a big relief for many to have students back at school.”

Now it’s just a matter of finishing the school year on a positive note, with children leaving school grounds every day with big smiles on their faces and blossoming friendships.