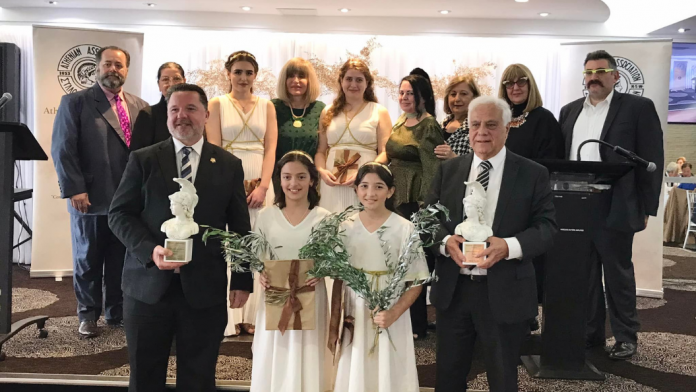 With a full house at the Grand Roxy in Brighton-Le-Sands, Sydney, the Athenian Association of NSW presented their Hellenic Achievement Award for 2020 and 2021.

A large number of distinguished guests were present at the award ceremony and luncheon, including the Head of the Public Diplomacy Office of Greece in Sydney, Costas Yiannakodimos; the Member for Rockdale, Steve Kamper MP; the President of the Greek Orthodox Community of NSW (GOCNSW), Harry Danalis; the Chair of the Greek Festival of Sydney, Nia Karteris; the President of AHEPA, Bill Skandalakis; and a number of representatives from local Greek community organisations.

James Tsolakis and Stella Sorotou, committee members of the Athenian Association, opened the presentation in both Greek and English to the delight of the crowd, with Cathy Valis presenting the awards to the two winners.

The Athenian Achievement Award was created in 2019. That year, Dimitri Dervos was honoured for his contribution to Hellenism through his efforts to establish the Athenian Association and to bring Greeks together for welfare, entertainment and to maintain the roots of Hellenic culture.

The Athenian Hellenic Achievement Award recognises those individuals and organisations making a positive contribution to Hellenic culture, language and the community from the diaspora and from the wider community within Australia.

The Award celebrates achievement and contribution in continuing the Greek culture, language and community engagement of future Australian Greek generations. It is important that we recognise such people and admire those brave enough to create a difference.

Greece is well recognised as having laid the foundations of western civilisation that the world lives by today. The golden age of classical Athens delivered lasting contributions in the Arts, Medicine, Law, Politics, Education, Language and the Sciences.

It is therefore appropriate that the Athenians deliver this award into the community.

The 2020 Award was presented to Dr Panayiotis Diamandis for his role in documenting Greek immigration history and in seeking justice for the persecuted.

Dr Diamandis is well known throughout the community. He is an active scholar in research and has delivered outstanding papers on the Australian Hellenic symbiosis, on the Hellenic, Armenian and Assyrian genocides. He is a sought-after speaker in Europe, Israel, New Zealand and Australia.

Dr Diamandis knows how to combine community service with the promotion of Hellenism. He is documenting Australian Greek history for future generations through his research, his membership of various institutions and his passion to seek justice for the persecuted.

He holds a PhD in Genocide Studies from the University of Sydney, he is the Secretary of AHEPA NSW, he is on the National Committee of the Holy Archdiocese of Australia, and a member of the Joint Justice Initiative.

Dr Panagiotis is making a continuing contribution to Hellenism.

The 2021 Award was presented to Harry Danalis. Danalis has held up the light of GOCNSW for over 45 years. In 1975, he was elected Vice President of GOCNSW. He took on the Presidency in 1977. In 1979, he oversaw the establishment of the first Child Care Centre in Stanmore. In 1981, a second Child Care Centre was opened in Marrickville. Areas with large Greek immigrant populations at that time.

In 1984, the Greek Festival of Sydney was established, under his leadership. In 1991, the Greek Club in Lakemba was purchased. Always focused on uniting the Greek Community, Danalis continued to bring about new services to assist the Greek community thrive and prosper. In 1992, land was acquired in Earlwood and the first Greek Home of the Aged Care was built.

In 1992, he travelled to Greece to resolve the Ecclesiastical differences between the community and the church. After 20 years, in 2011 it was resolved.

Danalis is passionate about his role as President of the GOCNSW and of his work over the past 45 years to bring Greeks together and to build community infrastructure for future generations. Danalis was also the receipt of the “Award55” by the Law Society for faithful service as a Legal practitioner of the Supreme Court of NSW.

Cathy Valis, President of the Athenians, acknowledged the winners and the selection process in her address to the crowd.

“We would like to wish our recipients the best and to continue their work. Everything we do we do for the future generations. To protect Hellenic culture, language and religion,” she said.

Valis acknowledged her committee for the hard work that goes into making such events successful. The Athenians will be celebrating their 70th year in 2023, making the Athenian Association one of the oldest Associations in Australia.

The Hellenic Achievement Award is an Athenian Association initiative. The Athenians accept nominations from the community. To get in touch simply email them at atheniansydnsw@gmail.com.