Antipodes Festival is back on Lonsdale Street 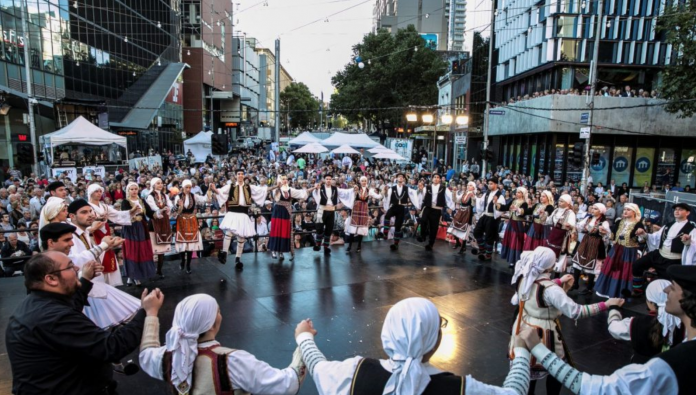 Festival co-chairs Jim Bossinakis and Leonidas Vlahakis are confident that this year’s Festival will be the biggest and the best.

“The 33rd Antipodes Festival will feature more stalls, vendors and performers than ever before which is a testament to the popularity and reputation of this internationally renowned event” said Jim Bossinakis.

Leonidas Vlahakis added “We encourage all Melburnians to attend. Attracting a crowd of over 100,000 Antipodes really is a celebration of cultural diversity. Our aim is to share the Greek culture with everyone in an inclusive multicultural celebration.”

Over 50 groups of local and interstate dancers and musicians will deliver free performances that range from traditional to modern Greek music.

Headlining the free Saturday night concert on the Delphi Bank main stage this year will be Athens-born singer, Yiota Nega.

The Closing night act will be one of Melbourne’s most gifted Greek exports- Sifis Tsourdalakis.

The ‘Zorba Til You Drop’ competition, as the name suggests, will reward the winner with the highest Zorba endurance with a return flight to Greece.

The ‘Magic Mic’ singing competition invites amateur performers to sing a song in Greek or by a Greek composer.

NEW to 2020 is the ‘Pass the Pastitsio’ cooking compeittion, where judges will award the best Greek baked pasta dish.

Another new competition in 2020 is the ‘Antipodes Amazing Race’, where six teams of two will take on a series of challenges.

A number of bars will be serving Greek-inspired beverages including Mythology and The Laundry. In addition, bars on Lonsdale street like Storyville, Touche Hombre and Emerald Peacock will also be getting into the Festival spirit by serving up their own Greek inspired offerings.

For those who would like to experience the Festival in style, limited tickets are available for the Greek Community’s exclusive Cocktail Party (Cocktail Party at the Greek) on Opening Night. Bookings through www.greekcentre.com.au or trybooking.com.

WHERE: LONSDALE STREET, MELBOURNE (between Swanston St and Exhibition St)