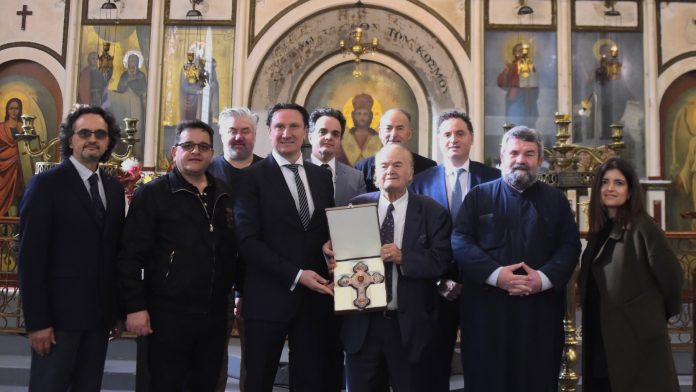 The Evangelismos Church in east Melbourne has been given a donation to fund massive restorations to repair “significant damages” caused by a fire five years ago.

The heritage-listed church will upgrade its flooring, lighting, and seating following a donation to the Greek Community of Melbourne (GCM) by a well-known benefactor.

So far, the mezzanine has been rebuilt, the heritage-listed LED light windows have been replaced, and ongoing archaeological work continues to restore the “templo”.

Andreas and the Andrianopoulos family have close ties and are significant supporters of the restoration of the church and benefactors of the GCM.

“For many years, it was the only church we had, it was a meeting place, a place where we celebrated our greatest joys, and our deepest sorrows,” Mr. Andrianopoulos said.

“Our community was founded with the support of benefactors,” he says.

“Construction of Evangelismos was made possible in the late 1890’s as a result of the generous donations of early Greeks in Melbourne.”

The church closed for two years following the fire which broke out during Orthodox Easter celebrations, leading 200 in neighboring buildings to evacuate and causing caused an estimated $500,000 in damages, according to Mr. Papastergiadis, in mid-2016.