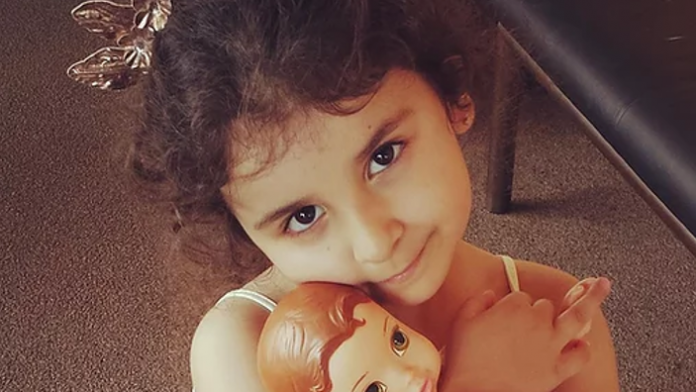 Sue-Ellan Hatzakos Vasiliou’s daughter, Alegra, was like any normal five-year-old. She was beautiful, caring and, as her mother says, she had the ‘most amazing brain.’

“She would remember everything. She knew who bought her what present and what they were wearing when they gave it to her. And we would ask her, ‘How do you remember all this stuff?’ and her response was, ‘because I care’,” Sue-Ellan tells The Greek Herald.

But just before Christmas in 2016, Sue-Ellan and her husband Marino took Alegra to the local doctor after they noticed the left side of her mouth would drop when she smiled.

The subsequent MRI scans showed what no parents should ever have to endure: Alegra had brain cancer.

Not ready to give up hope, the parents turned to Dr Charlie Teo who said he could remove a significant amount of the tumour. Following the surgery, Alegra had to undergo radiation therapy every day for six weeks at the Sydney Children’s Hospital in Randwick.

The initial results from this treatment were looking good as the tumour had shrunk. In fact, Alegra appeared to be on the road to recovery until August 2017 when she started to complain of back pain.

“It was just a week after she had her last check up with oncology, where they were all amazed with the results. But for reasons that we still struggle to understand, something had changed in what tumour was left and it had turned aggressive and was in her spinal fluid,” Sue-Ellan says.

“The doctors gave us days. Alegra gave us seven weeks at home… so we could spend time with her and her younger siblings as well.”

Alegra slowly lost the ability to walk and sadly passed away on October 7, 2017, at the tender age of six.

Sue-Ellan says one of the ‘hardest things to stomach’ from Alegra’s battle with brain cancer was being told there was no further treatment that could save her life.

“As parents, we’re supposed to be able to protect our kids. The fact that she wasn’t able to even try to fight… I think that’s hard because it’s just not fair,” Sue-Ellan explains.

It was due to this frustration, as well as the need to preserve Alegra’s memory, that her parents founded the little legs foundation in May 2018.

Together with their ambassadors, artist Sid Tapia, Emmanuel Tsakiris of House of Emmanuele and fashion designer Alex Perry, the foundation has pledged to raise awareness and funds for childhood brain cancer research.

“I want to give other children hope… and I want Alegra to be known to the world as well because she is such a special little girl that I would hate for her to be forgotten,” Sue-Ellan says.

To date, giving children hope and honouring Alegra’s memory is exactly what the foundation has been doing.

It has already committed $1.14 million to childhood brain cancer research through the Alegra’s Army Grant, which is set up in conjunction with the Charlie Teo Foundation. A special Alegra’s Army edition of Monopoly has also been created, with the funds provided to cancer researchers to help them continue their vital work.

But even more recently, Sue-Ellan says she’s incredibly excited for their upcoming Coffee for a Cure event, which is running from September 18 – 19 this year. $1 from each coffee cup sold will be donated to the foundation.

“We were a bit hesitant with COVID and some people obviously having a tough time, but we just kind of put it out there… and everyone is very supportive. I think it’s going to be a very good couple of days.”

And many would add that it will also be a very busy few days. But Sue-Ellan says she couldn’t picture herself doing anything else.

“It’s not easy. We’re grieving at the same time as trying to make a difference. But… I can’t imagine not doing something for Alegra. So this is how I’m able to do something for her every day and as hard as it is, it keeps us going as well,” she says.

With such passion and determination, it really is no surprise that Sue-Ellan was also nominated as a Westfield Local Hero this year. We wish her and her family all the best in their future fundraising endeavours!