‘A link between past and future’: Greek Museum of Adelaide opens new Exhibition 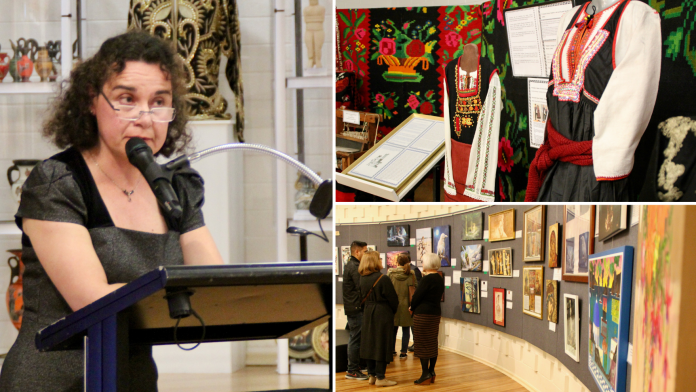 The official opening of the Greek Museum of Adelaide’s sixth Exhibition entitled ‘A Cultural Trip in Greek Heritage’ was held on Thursday, July 8, at the West Torrens Auditorium Gallery in Adelaide.

The exhibition aims to celebrate the Greek culture and heritage and honour the bicentenary of the War of Independence against the Ottoman Empire through a number of art pieces donated by local and international artists.

At the official ceremony, among others the Federal Member for Adelaide, Steve Georganas; Member for West Torrens, Tom Koutsantonis MP; Mayor of City of West Torrens, Michael Coxon; Mayor of the City of Charles Sturt, Angela Evans; newly appointed Chair of the SA Multicultural and Ethnic Affairs Commission (SAMEAC) Andriana Christopoulos and President of the Greek Orthodox Community of SA, Bill Gonis. Serving as Master of Ceremonies was the Museum’s Vice President, Spiros Sarris.

One of the event’s three main speakers, Mayor Coxon shared how he has experienced the Greek values of ‘Philoxenia, Philotimo and Philanthropia – Φιλοξενία, Φιλότιμο και Φιλανθρωπία’ and praised the Museum’s Founder, Chrysoula Melissinakis for her efforts.

Federal Member for Adelaide, Steve Georganas said that Adelaide’s Greek Museum is a link between past, present and future and highlighted the contribution of Greek immigrants to the country’s multicultural tapestry.

President Chrysoula Melissinakis, thanked the attendees, members, supporters and volunteers before she went on to stress the importance of a permanent home for the Museum’s ever-growing collection.

The Exhibition will be open to the public until July 30 and features a number of Lectures (in English and Greek) as well as Fundraising Movie Nights for a Gold coin donation. For more information and details visit: http://greek-museum.com.au