‘We are one’: Melina Aslanidou sends message to Greek Australians ahead of Sydney concert 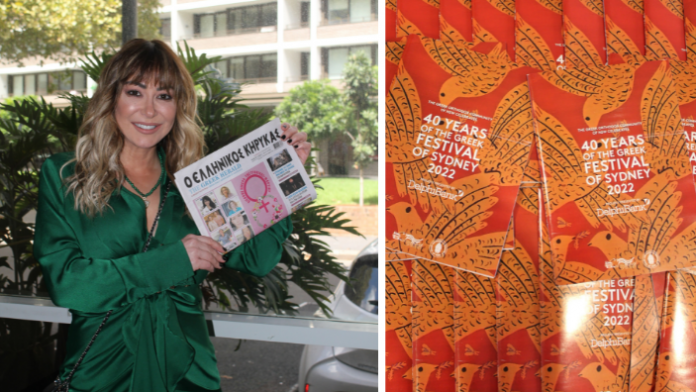 Excitement is growing amongst Sydney’s Greek community as much-loved international singer, Melina Aslanidou, prepares to hit the stage at Enmore Theatre on Wednesday, March 16 at 7pm.

Aslanidou arrived in Sydney last Thursday night and hasn’t wasted any time mingling with her local fans and sending a message to all Greek Australians ahead of her concert.

Speaking at a press conference organised by The Greek Festival of Sydney and the Greek Orthodox Community of NSW (GOCNSW), Aslanidou expressed her joy at arriving in Australia and congratulated the local diaspora for maintaining their Greek culture and traditions.

“I was born outside of Greece in Germany and so I have an accurate understanding of how it feels to live away from your homeland but for it to be a part of who you are wherever you are,” Aslanidou said.

“So it will be my pleasure to put all my feelings as a Greek into songs which showcase our homeland, our culture, our ethos and our traditions because it is very important to never forget our traditions.

Later, during a Q&A segment facilitated by Festival Chair Nia Kateris, the Greek singer talked openly about what people can expect from her upcoming concert and stressed that “it will be magical.”

In response to a question from The Greek Herald, Aslanidou, who has Pontian heritage, also gave an insight into whether she will be performing any Pontian songs at her concert to mark the 100th anniversary of the Asia Minor Catastrophe this year.

“In my shows, I always have a Pontian song in honour of my roots and can guarantee there will be one on Wednesday night as well. A song sung with love and devoted to all Pontians worldwide and all those who love our music,” Aslanidou said.

*All photos and video copyright The Greek Herald / Andriana Simos.