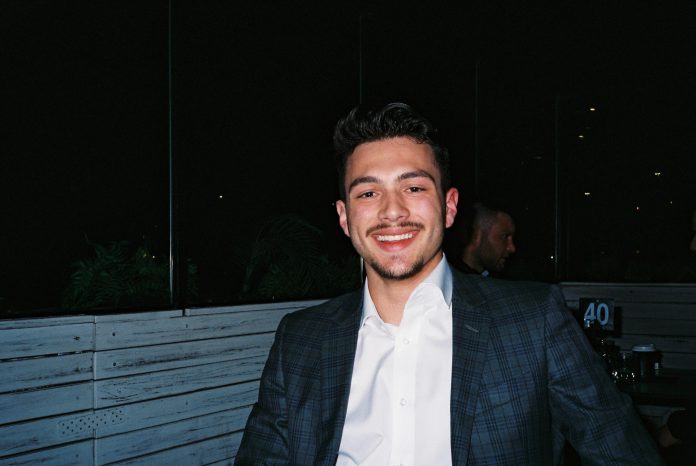 Greek Australian, Jake Peters, is clearly wise beyond his years. The 17-year-old is the mastermind behind Melbourne’s biggest Greek inspired underage event, Kosmos Events, which has been impacted by the recent lockdown in the city due to coronavirus. But he says that hasn’t put a dampener on why he started the event in the first place – to show people that safe underage clubbing is possible.

“As I was growing up I noticed a lot of drug and alcohol abuse at parties and so I wanted to create a safe space where underage kids could experience the Greek culture and meet others like them in the area,” Jake tells The Greek Herald.

And that’s exactly what Jake ended up doing. Kosmos Events launched its first Greek night for kids aged 13 to 17 years old in May 2018 at a small hall in Coburg. The proud display of Greek music and dance was such a hit with the underage crowd that they’ve since held eight events in total.

But with growth comes extra responsibility, something Jake says he was happy to take on as it meant he was ensuring “parents felt comfortable” with the events as well.

“We did have to hire a lot of security. At the beginning the problem was that I, as a 17-year-old, had to call up security companies to pay $10-$15,000 and they were laughing at me and not taking me seriously,” Jake says.

“But I was lucky I had the support of my parents and they were able to make some phone calls for me. At the end of the day, I was glad that we were doing it safely and that was a huge thing that made parents comfortable as well.”

In Jake’s eyes, all the hard work was worth it as the events ended up showcasing the Greek culture and heritage he was so proud of, and also allowed him to utilise the business skills his pappou taught him.

“My pappou owned a seafood market so I grew up my whole life working there and helping. I grew up with that business mindset… that if you want something in this world, you had to do it yourself and work your hardest,” Jake explains to The Greek Herald.

“I wanted to utilise that and of course, my Greek heritage is such an important part of my life. It’s made me who I am as a person.

“So to have a lot of kids coming up to me and saying ‘you’ve motivated me to want to learn Greek now’… because of these events, that’s amazing. I feel like it’s really made a positive change in people’s attitude towards their Greek heritage, which is really what I care about the most.”

A young Greek Australian who is deeply passionate about the Greek culture and most importantly, how the youth can experience that culture in a safe clubbing environment.