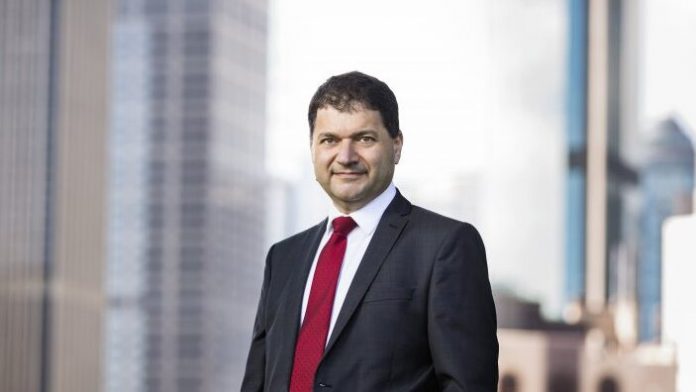 The recently announced sponsorship agreement between A-League side Sydney FC and Bank of Sydney was met with great enthusiasm on both ends. Although for the financial firm it certainly won’t be the first major sports investment, it’s certainly the biggest they’ve made in the football industry.

Speaking to The Greek Herald, Bank of Sydney CEO Miltos Michaelas points out that through the series of negotiations with the club’s stakeholders, they were able to see that the two parties had quite a few things in common, a fact that simplified the agreement: “I must admit in the end it was an easy decision. Our interaction with Sydney FC began over two years ago. And in that time, it became clear that we have things in common, starting from our values.

“They’re a community club, they worry about their audience, the way they’ve acted on certain issues, we found all of that to be in alignment with our own values. Additionally, the communities we tend to support follow soccer as much as possible. So, we liked the people, their values and their messaging. But furthermore, the audience they have is good for us as well.

“We’re talking about the best (football) club in Australia, they’ve been highly successful. I think Sydney is proud of this team and there is a lot of common ground to be found even when considering our audiences.”

“Also, this was not an imposed relationship. They took their time, they talked about it, which is what we do with our customers as well. We never oversell anything in our bank, and we didn’t see that happening in this case either. So, if they had the patience to sit and talk with us and come to an agreement, then that’s definitely someone we want to be in business with.”

“We do things with a long-term vision in mind, and I think we may have surprised them when we said near the end of our negotiations that we wanted to sign on for at least three years. But that’s just how we like to operate. This wasn’t something which was enforced on us, we saw an opportunity there and decided to take it.”

Michaelas: ‘We believe in sport’

When asked if the A-League is the right place to be making investments, the executive officer responded confidently, pointing towards the recent success of the men’s national team but also the continuously rising participation numbers: “One thing you should know about this bank is that we support somewhere close to 20,000 kids who are related to soccer. We believe in sport because it comes with the territory.”

“We also backed the Rabbitohs for three years, so this isn’t our first major sponsorship. But when it comes to soccer, the question is always “will it bloom?” And I believe the time has finally come, especially with Sydney FC, they have a successful history, they’re building a new ground and let’s not forget, the Socceroos have just won ten games in a row.

“And after a decade or so of this new league, I believe the clubs are beginning to mature in terms of understanding that they still have a lot of room to grow both in men and women’s soccer and to try to win the hearts of the sports loving Australian audiences. I think soccer is ready to bloom and we definitely want to be part of that!”

Responding to if this only a first step for the firm when it comes to major sponsorship agreements, Mr Michaelas didn’t seem to be much in favour of that way of thinking: “I would probably say no and that would be for a very simple reason. Based on who we are, we need to meet the community needs in two ways: we want to support a lot of grassroot organisations, mainly in soccer because of our history, but we have that going on for many clubs.

“Then, we have chosen Sydney FC to be our one major sponsorship and as I said, we’ve committed ourselves to that agreement for a few years. The issue with thinking about extending towards another major deal is a matter of resources and a matter of focus. And we don’t want to sacrifice the support we provide towards grassroots in order to give ourselves the room for a second opening. We would like to continue with this model for a while.”

Finally, when put in the position of a potential South Melbourne-Sydney FC FFA Cup meeting, the executive officer maintains a diplomatic approach: “If the two teams were to meet, I would look forward to a great game, one that provides inspiration to aspiring footballers everywhere. One thing is for sure though, after the end of the game I would go to the team that lost and congratulate them on their performance, then go to the side that won and celebrate their success!”