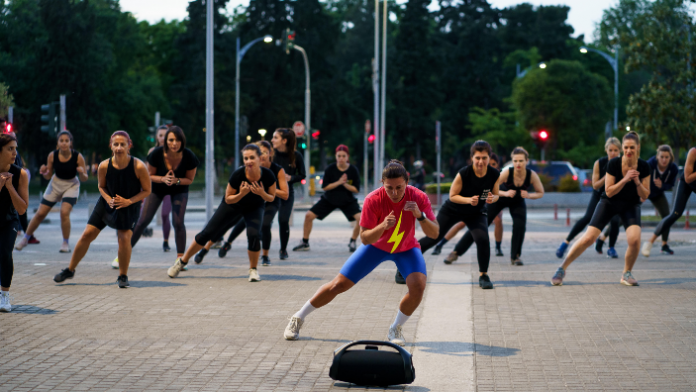 Hara Liokos Lazarou decided to stir up the Greeks of Thessaloniki with her energy and teach them to train outdoors. Outdoor training – as it is known in Australia where Joy was born and grew up – greatly helped the residents of the city during quarantine.

She organised free lessons outdoors in Thessaloniki and took a lot of people on the street. People from 6 years old to 83-year-old Mrs Areti, who attended her course a few days ago.

Personal trainer Hara Liokos Lazarou started her initiative from the very first lockdown, and performed gymnastics continuously for almost 12 months for 3 to 4 times a week.

“When we were given the opportunity to do gymnastics outdoors 2 people at a time, I said I would start it and do it every day. So I started making calls through Instagram and visiting various parts of Thessaloniki, the City Hall, the Macedonia Palas, the Xarhakos Park and the courtyard of the Thessaloniki city hall,” Hara tells The Greek Herald.

“I put on loud music and started the lessons,” Hara adds, while explaining what prompted her to take this initiative: “It was my personal need and all this suddenness, which forced us isolate in our houses and not be able to go to the places where we work out. Suddenly, the world wasn’t well and I wanted to keep people’s spirit strong and alive. That is what I wanted and it was very important to me, to keep the morale of my team up.”

The love of the people:

Hara was hosted on Greek television broadcasts for this initiative. Her success was great since people were looking for a way to escape from the difficult quarantine restrictions.

“The world had the urgent need to defuse itself. What we discuss after the end of a workout is not to stop doing gymnastics outdoors,” Hara says.

“In Greece it is not particularly widespread. I was familiar, of course, since we did gymnastics in parks in Melbourne. And so I told a lot of people that gymnastics is nice and indeed, those who followed me loved it.

“I will continue to do lessons despite the fact that it is summer in Greece and the temperature has risen. I had a team of 10 people at the beginning, then they became 20, 30, 50 and today I have a very big team.

“I’ll stop classes for a while in the near future to get some rest. Since the first lockdown I have not stopped. From September I will continue as normal,” she tells us.

“From Australia to Greece”:

These days Sydney is in a tough lockdown and we asked Hara if she is learning the news from the country in which she was born.

“I have been following the news in Australia, since half my family continues to live there. In fact, I hope that in October or November I will be able to go on a visit to Australia even though things are difficult.

“It is a fact that Greek Australians and Australians in general are more familiar with gymnastics outside of gyms. So the lockdown will not stop them from working out.”

“I am from Melbourne” she tells The Greek Herald and begins to tell her story. “I came to Greece in 2008. I went to a Greek school there and studied Greek and English literature at the University of La Tromp.

“In 2008 I came on vacation to Greece. I met Eleni Petroulaki (one of the most famous gymnasts in Greece) and took me as her right hand.

“Every year, of course, I was saying: I will go back to Australia … But I didn’t… This is because I loved the way of life here in Greece. It’s a lot different than it is in Australia.

“For example, in Greece you can work for 8 hours but you can enjoy the rest of the time.

“The first years of my stay in Greece I struggled very much. I was bothered by a lot of things. From cleanliness, from the traffic in the street, where people do not care about others. In Australia when there is a rule we adhere to it. In Greece things are much looser.

“But what I loved in Greece is the people and that is the reason I stayed here.”

Future plans with the Greek communities:

After the success of the initiative was received, Hara Liokos Lazarou is now making other plans. “I want to start a program with the Greek communities in Europe, America and Australia,” she says.

“It will have live music by artists and gymnastics at the same time. The artists will be either from Greece or from the Greek Communities, which I will visit every time.

“This program will combine music, gymnastics and fun together. So you will go to listen to your music and at the same time you will be able to do gymnastics.

“For example, in Munich I have found a complex, which is a good alternative. In Melbourne I have too many people to do the equivalent. It’s something that’s never been done before. To watch a live music concert and do gymnastics as well”.

We asked her to tell us one thing that she misses from Australia and one that she will miss from Greece.

“I miss the smell of Melbourne, Oakley…  I’ve had a fantastic time there.

“I don’t know how things will turn out for me. For example, I may decide to have my family in Melbourne because the services in Australia for health and education cannot be compared with what Greece offers” concludes Hara, who continues to do gymnastics with the Thessalonians.