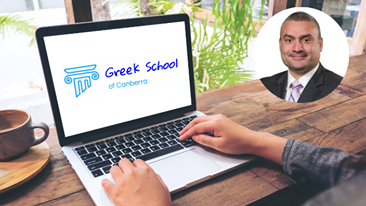 While many Greeks in densely populated NSW and Victorian suburbs have a wealth of options to study Greek, the reality is that many people regional areas have very little access to Greek language and culture education.

Greek Community of Canberra launched last year a collection of online Modern Greek Language & Culture Classes for Adults. Starting the classes in 2020 with 11 people and growing to 50 by the end of the year, GCC President John Loukadellis hopes the classes can reach a national audience for 2021.

“So more aimed at regional people would who love to learn the Greek language. It doesn’t matter what level you’re at. You tick the level on the enrolment form and we can do the rest.”

Loukadellis said the classes are part of the Greek Community of Canberra’s ‘Three Pillar Program’ launched last year, which looks to bring together the Hellenistic ideologies of faith, culture and language. Tied in with the 200 Year Anniversary of the Greek War of Independence, the Community President said there has never been a better time to “embrace, learn and speak Greek”.

The Greek School of Canberra already had an incredible growth in student numbers in 2020, having 150 school students online. Combined with the adult Greek language and culture classes, Loukadellis said he wants to have 300 people learning Greek with the assistance of the Greek community of Canberra in 2021.

“To me that’s the best thing that we could have done. As a president of a community, encouraging the gift of language and culture to ensure that not only do we celebrate 200 years, but when we celebrate 300 years, the Greek language and the word Greek is still still around and people can still identify with being Greek.”

The program has already attracted two people from Goulburn, Loukadellis said, and looks to bring in even more people from regional areas.

“My aim is to push Hellenism for our youth already in an established system in Canberra and target the niche of people in regional Australia or adults who want to learn from the comfort of their own home,” Loukadellis concluded.

“We’ve got four classes per week for the different levels. There’s two intermediate classes, one advanced and one beginners. And all of this is just a matter of getting people excited about learning Greek, especially in the year of the 200 years of independence.”