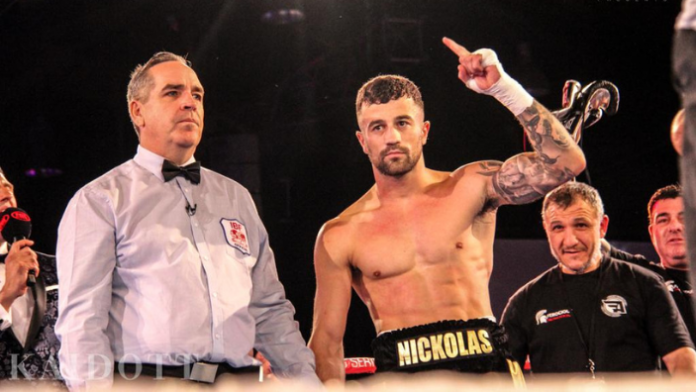 After a successful professional boxing debut last month in Canberra, the Adelaidian who has an impressive Commonwealth Games campaign under his belt, caught up with The Greek Herald and talked about his heritage, his relationship with world rated George Kambosos and his plans for the future.

“The fight in Canberra was a positive start to my professional career. I won the fight in the first 30 seconds. My team and I have been waiting all year for this and we finally had this chance,” says the 27-year-old boxer.

But this win didn’t come without hard work behind the scenes, in a challenging year that has impacted sports events and professional athletes globally.

“Due to the pandemic most of the shows were put on standby last year but we’ve been working hard in the gym and we are looking forward to going back in the rink and continue that journey,” Nickolas says as he focuses on the life lessons he carries with him to the next chapter of his career.

“When times get tough, we, boxers, are taught to never give up, to stay strong mentally and physically and to stay positive. If I had given up this year I wouldn’t be where I am now.

Drawing inspiration from his heritage

Boxing is undoubtedly a tough sport as it requires not only endurance and strength but also nerve and the ability to overcome fear.

What is Terry’s kryptonite and what runs in his mind before every fight?

“What my grandparents went through when they left Greece and the struggles they’ve been through in Australia to create a better life for us, is what motivates me. I always think about that.

“Hopefully I will soon be able to go back to the roots and have a fight over there,” he says.

His relationship with George Kambosos

And he hasn’t looked back.

“I look up to George and admire him for putting Australia and Greek Australians on the map of the sport. He’s an incredible athlete.

“To train with and be around him is a privilege. This year especially, I am very lucky to have been side by side with him,” Terry says as he’s now preparing to… make some noise in the Australian boxing scene before he sets off to achieve a bigger dream.

“When I give a few fights in Australia the goal is to follow in George’s footsteps and get into America, into the US boxing scene.

“That’s the goal and I’m sure we’ll get there with the right team behind me. I hope one day to fight for a World title as well.”

We will be here to watch this fight. Best of luck Terry!