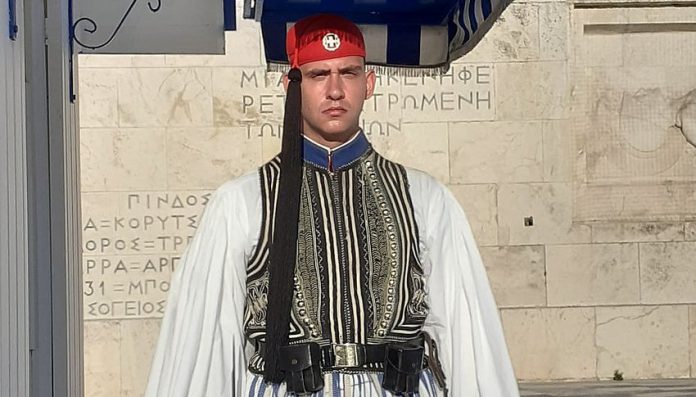 A 28-year-old Greek American obtained a Greek passport just to serve the country of his ancestors as an Evzone, a member of the famous Presidential Guard.

Andreas Holevas, born and raised in Pennsylvania, said that he wanted to become an Evzone and be just as “prosperous as my grandfather.”

“Last year I did all the procedures to become officially a Greek citizen, I got a Greek passport and in January 2020 I enrolled to the Greek army,” Andreas told a Greek media outlet.

“After I took the oath at Soufli (a town near the border with Turkey at Evros), I managed to make my dream come true and join the Presidential Guard,” he added.

The offspring of Greek immigrants to the United States in the 1960s, Andreas was born in Harrisburg, Pennsylvania in 1992.

His grandfather, Georgios Holevas, served in the Presidential Guard in the late 1930s and in a post on Facebook, Andreas said it was an honour to follow in his footsteps.

“My journey has been full of ups and downs, but I’ll never regret my decision. Along the way I’ve bonded and created a family that can never be broken,” Andreas wrote.

“The life of a evzone can never be understood by anyone, only by the very few who have the honour of serving as a evzone. Once an evzone, always an evzone.”