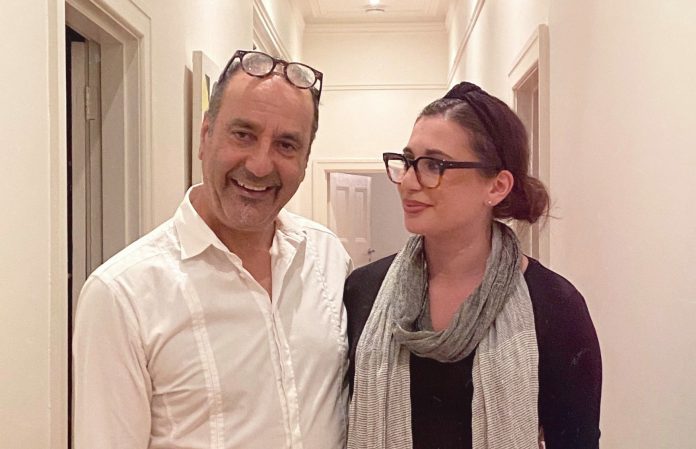 Cypriot-Australian artist, George Petrou, and his daughter Grace are currently travelling around Australia with his iconic portraits of Australian war veterans.

Their aim is to photograph the relatives of these war veterans and along the way, document the courageous stories of survival for Petrou’s new book ‘The Art of Sacrifice,’ which is due to be released in March 2021.

“I have about 80 military portraits that I’ve done and what I wanted to do was connect people to those portraits. I’ve met alot of relatives, grandsons, granddaughters, uncles and aunties of war veterans through my travels, and my daughter and I decided to photograph these family members and get them to write a small part of the story of the subject I’ve painted,” Petrou tells The Greek Herald exclusively.

“Overall, we’re going to photograph about 50 people, with 50 different backgrounds, in one week. It’s a time-consuming project but worth it in the end. I wouldn’t have it any other way.”

Time-consuming is one way to put it. Petrou says he and his daughter don’t only plan to travel within his hometown of Melbourne, but they are also travelling all the way down to Sydney.

“Our very first stop is Corryong, then we’re going to Aubury to photograph the son of Victoria Cross recipient, Albert Borella, from WWI. His son is still alive, so we will photograph his family – there’s about five of them,” Petrou says.

“From there we are going to Canberra where we are taking about five shots at the War Memorial. Followed by Nowra, the Sydney ANZAC Memorial and then back Melbourne. When the borders reopen we will head to Brisbane and Adelaide as well.”

It’s clear that Petrou will not let anything get in the way of his dream to share the extensive history of Australia’s war veterans.

“I’m very passionate about discovering all these stories and my new book is the perfect opportunity for me to reconnect with people I’ve met on my travels. I’m excited to showcase my findings to the world soon.”

More information on George Petrou’s new book ‘The Art of Sacrifice’ will be released soon.