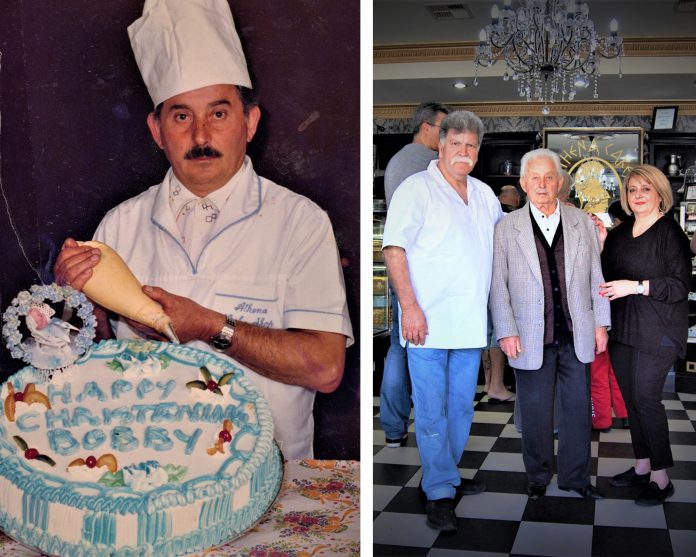 What is interesting about shops and businesses that have been located at the same spot for decades is these shop and business owners have witnessed all the changes in their local area. They have seen shops and businesses come and go, the demographics change, and people’s attitudes and values change too. In the last fifty years, Marrickville has seen great developments and changes, and will continue to do so.

Just across the road from Danas Deli Café is Marrickville’s longest running cake shop, Athena Cake Shop, and talking to Efy Ahtypis (nee: Spyropoulos) of Athena Cake Shop, it is so fascinating to listen to her knowledge of the local area and its contemporary history.

Her father, Aristomenis Spyropoulos, had worked in Nikolaos Karavitis’ cake shop in Patra from the age of twelve; years later, Aristomenis and his wife, Athina, established their own cake shop, Astoria, in Nafpaktos.

As a young child, Efy migrated to Australia with her parents, Aristomenis and Athina, and brother, Kosmas, in 1969. Aristomenis’ first job was in the ‘Glass Factory’ and he also worked in an oil factory as well as the Hellenic Bakery (called Artos Bakery at the time).

Within two years, the Spyropoulos family bought their first home; within four years, they bought the premises, on Illawarra Road, Marrickville, to establish a cake shop. Aristomenis decided to call the cake shop, Athena Cakes, after his wife, Athina. When Kosmas and Efy became teenagers, they also helped their parents in this family buinsess.

Over forty- five years, Athena Cake Shop has been through a few renovations; Aristomenis and Athina retired; and, Efy and her husband, Christos, have been running the business since 1995.

But what has been truly amazing is the changes to Marrickville Efy and her family have experienced over the years, as she recounts the story of when Athena Cake Shop, local Australians at the time would pass the shop and ask Aristomenis if he had anything Australian so he would also make up ‘slabs’ of jam and cream and lamingtons to cater for their requests and tastes.

As Efy points out, ‘Nowadays, so many Australians come into the shop and they love the Greek sweets and savouries! It is rather amusing to hear them order a ‘baklava with custard’ (‘galaktobouriko’) and a ‘tiropita with spinach’ (spanakopita). And they love eating our mousaka! These days, people really want good quality food and our shop caters for this. Gone are the days (1980s) when people were rushing for cheap fast food… Our customers are looking for freshly baked food, with no preservatives…’

As I have been emphasising for some time now, it is shops and businesses such as Athena Cake Shop that has played an important role in maintaining our Greek identity and culture- through their vast array of sweets, biscuits and cakes; equally important is how Efy and her family have broadened the appeal of their recipes and products to influence Australian tastes and likes.

It is so important to highlight how so many Greek foods are now part of the Australian cuisine and it is fitting to pay tribute to shops such as Athena Cakes and its contribution towards this process and acceptance.