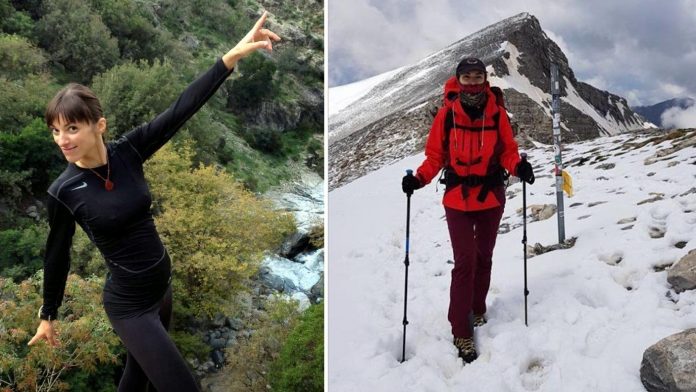 The famous provocateur of France’s literary scene, “enfant terrible”, Michel Welbeck wrote in “Map and Territory” that: “life gives us a chance at some stage. If we are cowardly or undecided to seize it, life takes back its cards”.

There comes a time, when we need to do something to approach a potential happiness. This moment lasts a few days or even a few months, yet it occurs once.”

For Kiki Tsakaldimi, the first Greek woman to attempt to reach Everest, this opportunity appeared in 2014. In a “TEDx Thessaloniki”, where she heard the speech of Indian, Satyabrata Dam about the mountains.

Perhaps, imperceptibly, the memories of her dead dreams flooded her. “Until then I thought life had a roof. I had my job, my everyday life my friends. And then, suddenly, I heard his speech, which changed my life” says Kiki, who recently after the relaxation of restrictive measures climbed to the highest peak in Europe, Mt Elbrus, for a good cause. To raise awareness about lung cancer.

Her last ascent was the reason to converse with The Greek Herald and it became possible thanks to that speech, which was imprinted in her, like the trace left upon soft wax. Forever.

“It’s shocking that with a speech he convinced me that I can manage everything. That’s where the key to success is found. You have to believe in yourself. Today I believe that I can achieve everything” says Kiki, who lives permanently in Alexandroupolis and from there she makes her plans to conquer the highest peaks of the world.

The epiphany of that day had continued. The flame had been kindled in Kiki Tsakaldimi’s soul. So, she found the legend of mountaineering, Satyabrata Dam and asked him for help her change her life.

“Satya became my teacher, my coach, my guide in all the mountaineering expeditions that I have done to date,” says Kiki, who in 2017 decided to tackle the beast.

Faced with fears in the vastness of Everest

She envisioned peaks unfolding in her eyes while dreaming in Alexandroupolis, and her goal of becoming the first Greek woman to reach the summit of Everest began to take shape. Although there was no mountaineering background, in collaboration with Satya Dam, a preparation plan was created, which involved mountain climbing.

The greatest difficulty, however, was the raising of the money required. “I was beaten by the goal but it did not deter me. Difficulties are our friends. A lot of money was required to go there and despite the distrust I managed to find the funds needed because I was determined, ” says Kiki, the personification of optimism and a woman, who goes beyond her limits.

The days passed and in 2017, Kiki hovered in absolute vacuum, with minimal oxygen, with a temperature of -60 C and winds at 110 km. per hour. On Everest she was faced with her fears.

“A mistake there could put an end to your life. There is so much fatigue accumulated in your body that you have to be perfectly focused and attentive to the slightest movement.

They are the dead bodies you see on the steep slope, of climbers who did not respect the mountain and paid for it with their lives.

Death is around you, but you stay perfectly focused, disciplining every command of your guide” says Kiki Tsakaldimi in the” Greek Herald”.

The collapse of the dream

It was May 23, 2017. At a height of 8.250 meters when Satya Dam instructed the Greek mountaineer that it would be wiser to return back and not put their lives in greater risk.

“Emotions flooded in. Everything collapsed inside me. The dream I had was not fulfilled. Disappointment, sadness for a short time but also pride because I was the first Greek woman to reach such a height.

When I returned back I felt all-powerful, but retaining in me humility. I came back with the feeling that after I managed to get there, nothing can bend me”, notes Kiki Tsakaldimi

Disappointment became fuel for the sequel and in October 2018 Kiki Tsakaldimi, supporting the “Smile of the Child” climbed the summit of Mount Kilimanjaro in Tanzania and became the first Greek climber to step on the summit of Ochos del Salado (6,893 m.) of the Andes in Chile, where there is also the highest volcano on Earth.

In Alexandroupolis, where she lives permanently, she remains alert, with the actions continuing less with mountaineering, but with more hiking.

A few weeks ago Kiki Tsakaldimi climbed Elbrus, Russia, the highest peak in Europe, on behalf of “FairLife L.C.C.”, an organization against lung cancer with the slogan “Only Life Is Breathtaking”.

“It was a climb certainly not easy. The conditions were not favourable but the purpose gave us impetus” says Kiki, who climbed with Satya, the Legend-climber and Ioannis Karadoukas, a 74-year-old climber who at every opportunity recalls that dreams do not have age.

“We wanted to send a resounding message for lung cancer prevention. We reached the highest peak in Europe. It was an experience special and unique. When we reach the top and see everything from above everything changes. It all looks so small.

There we are breathless by the view, by nature, by the greatness of the life we gaze upon. This is the motto, such images, those of life to be breathtaking and not lung cancer.

We must all adopt a healthy lifestyle to protect ourselves and those around us. This is also the message of which I am a bearer from “FairLife L.C.C.”.

Kiki aims to come to Australia as well.

She wants to climb the highest mountain in the country, Mount Kosciuszko. “I will definitely be seen at some point by our expats in Australia. I want to conquer the Seven Peaks in the world. They are the highest mountains on each of the seven continents. It’s a mountaineering challenge.”

“Of course our expatriates can come to Greece and get to know each other here” concludes Kiki Tsakaldimi in her interview with the “Greek Herald”.

‘This one is for the fans’: Sooshi Mango win at the AACTA Awards 2021