Ancient Greeks a connection of the past to the future: National Museum director, Mathew Trinca 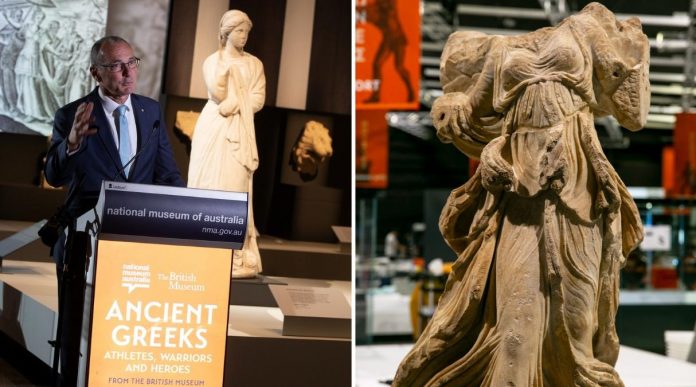 Due to his upbringing, he understands that pronouncing one’s name correctly is more than important and a common courtesy. It can be representative of one’s culture, heritage, race and overall identity.

The son of an Italian stone-mason who migrated to Australia and to an Australian-born mother of Italian heritage, Dr Trinca and his three sisters were brought up in a family melding an Italian background with Australian life on the outskirts of a city in Western Australia, not far from the bush.

We start chatting about the beauties of rural Australia and the skies above the Central Australian desert in the Northern Territory, some of the only places in the world to see the southern hemisphere night sky at its clearest.

“When you are in rural and regional Australia, you get a very different sense of Australian life,” he says.

Growing up, Mr Trinca never thought he would end up living in Canberra and being director of the National Museum of Australia but he attributes what he has achieved so far -both in his career but most importantly in life- to the values his parents instilled in him.

A trained historian with a PhD in Australian history from the University of Sydney he joined the National Museum as a senior curator in 2003, after working at the Western Australian Museum in Perth. From 2006, he was the Museum’s assistant director, Collections, Content and Exhibitions and then became the director in 2014.

Passionate about ancient history and the stories that weave together to make up Australian life he talks proudly about the ‘Ancient Greeks: Athletes, Warriors and Heroes’ exhibition and how the museum’s 250 strong staff managed to overcome the challenges caused by the pandemic to bring it together.

“It’s been a testing time. We have to understand, as well, there’s many people in the country who’ve had much more challenging times than us like our health workers…also recording the experiences of people in these two years has been so important,” he says.

“That has really kept me going. And the quality and the sheer commitment of the staff of the museum.”

With the same sentiment he talks about Australia’s Greek community and how its members got together to help make the exhibition happen and embraced it.

“We wouldn’t be seeing the success of this exhibition the way we are, even in these tough times, without that support from the Greek Australian community. I can’t tell you what it has meant to make the friends and connection that we’ve made through this. It doesn’t happen with every showing,” he says.

“The pride and expression of interest and ownership that I’ve seen from the Greeks is notable. This show is the show it is because of their involvement.”

The exhibition as a connection of the past to the future

Despite lockdowns and interstate border restrictions that heavily impacted not only the National Museum but institutions nationwide, more than 40,000 people visited the exhibition in January to admire the exhibits that showcase the competitive spirit of the Ancient Greek world through sport, politics, drama, music and warfare.

“You see, and you make connection with the essential elements of human spirit and how those things that drive us, propel us forward in our lives today were present in the human condition 3,000 years ago,” says Mr Trinca.

“We live in a completely different world from that of ancient or classical Greece. Yet, at the level of the human spirit, you see the commonalities.”

When I ask him about the importance of this exhibition to Australia the Museum director says that “the contribution that the Greek peoples have made to Australian life is extraordinary”.

“When you think about the ancient classical Greek world and what it then inspired in other parts of the world, it’s almost impossible to think of a sphere of human life where there hasn’t been some impact of Greek culture,” he says.

“We almost have to know something about the ancient Greek world, if we’re to make sense of our communities and our lives today.

“I think it’s important for all people to have some sense of what they’ve come from to make sense of their present, and where they might be going in the future,” says Mr Trinca highlighting that greater numbers of young people come to exhibitions compared to a decade ago.

Ancient artefacts that continue to captivate

The exhibition features more than 170 objects from the British Museum’s collection of Greek treasures, with artefacts dating from 800 BCE to 200 CE but two are Mr Trinca’s favourites.

The pieces are a black-figured amphora (wine-jar) depicting Achilles slaying Penthesilea by potter Exekias and the marble relief of the Apotheosis of Homer signed by the sculptor Archelaos of Priene.

“I suppose, because in both cases I prevailed on my counterpart at the British Museum to include them in the exhibition,” he says.

“It’s a deeply moving thing to see that someone, thousands of years ago, has created something of such beauty that you can respond to in the present. And, that’s all through this exhibition.”

As we wrap up this interview, I am thinking that we are lucky as a community to be able to admire pieces from our home country’s ancient history in Australia, the country that gave us the opportunity to flourish while keeping our language, faith and heritage alive.

But also, lucky because the country’s National Museum director is of Italian heritage, has spent his childhood in rural Australia, reads Homer and makes the effort to pronounce people’s names correctly.

Because how can you tell the different stories of Australia if you don’t know its people?

*Ancient Greeks: Athletes, Warriors and Heroes shows until May 1, 2022. Tickets are available from nma.gov.au