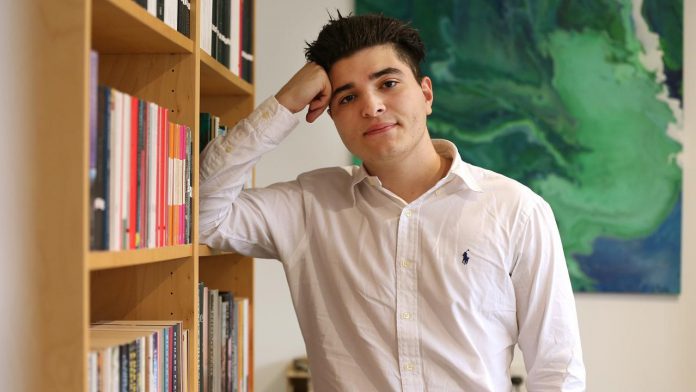 “It’s a witchhunt,” said 21-year-old Drew Pavlou in a special edition of 60 Minutes last night. He’s referring to how a small protest he organised in support of democracy in Hong Kong at the University of Queensland (UQ) this year, landed him a suspension and made him a target for the world’s biggest communist superpower, China.

“I think the University of Queensland suspended me because they realised my protest threatened a relationship with the Chinese government that was worth thousands of millions of dollars every year,” Drew added.

UQ has faced media scrutiny in recent months for its relations with the Chinese government, which has co-funded four of its courses. The institution is also home to one of Australia’s many Confucius Institutes, which are Beijing-funded education centres.

What the university hadn’t planned for however, was a young Greek Australian to rise up against this relationship and challenge it publicly for the whole world to see.

“When you grow up in a Greek Australian household, they are very fiery households. It’s the Mediterranean blood,” Drew told 60 Minutes reporter, Tom Steinfort.

“I think UQ and the Chinese government sort of underestimated me because they didn’t know that I’d already been forged in the fires of the Pavlou family household.”

The son of Nick and Vanessa Pavlou, who own a Brisbane fruit shop, Drew says his parents love to live “a nice quiet peaceful life” and that the death threats he received after the protest were hard for them.

“That’s the hardest part for me. It makes me feel really terrible that it’s brought my family into it and they never wanted that. They just want a quiet life. That’s probably the thing I’m most ashamed of,” Drew said.

But at the end of the day, his parents are still supportive of his newfound activism, albeit hesitantly.

“As a mother, you don’t want that for your child… I’m happy he’s found his passion and I want him to pursue that and we want to encourage that, but it’s not what we would’ve chosen,” Vanessa Pavlou said during the program.

And it seems his passion has only been ignited further with his court battle against UQ to revert his suspension having been lost this month.

The student activist was recently informed he would be suspended for the remainder of the year and required to complete 25 hours of “campus service.” He was found guilty of two allegations of serious general misconduct and not guilty of seven other alleged offences. Something Drew says he will fight against.

“I will fight this decision every step of the way in the Supreme Court and will have total exoneration,” Drew said.

“The Chinese government have tried to scare me to stop my activism but why should they care about me? They only care because they can’t tolerate criticism anywhere, even from a seemingly nobody.”