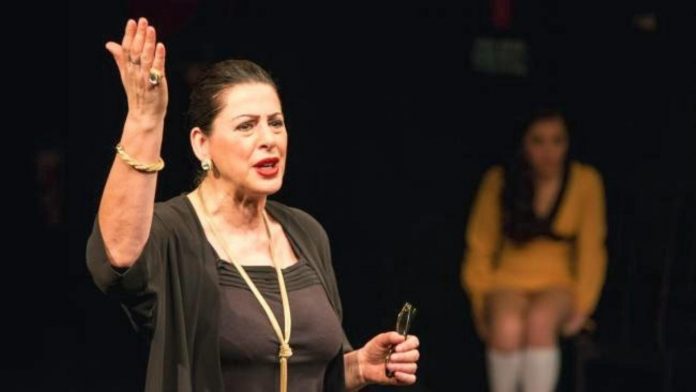 Much has been written about the popular Australian performer, singer and actor, Maria Mercedes. She has given many candid interviews over the years, incorporating of late, her decision to also use her real name, Maria Moutsidis, in her work.

This decision to embrace her birth name has been part of the process of a Greek Australian woman coming to terms with her roots, with her parents’ struggle, as well as confronting her own ‘Greekness.’

Maria may be a talented performer, but she has nonetheless worked hard on both herself, and on her career. Her stardom is exhibited in a decades long career biography, ranging from Young Talent Time in the 1970’s, to Homicide, to Prisoner (70’s & 80’s), to the movie Head On in the ’90’s (directed by fellow Greek Australian Anna Kokkinos based on the novel by the world-acclaimed writer, Christos Tsiolkas).

Furthermore, Maria Moutsidis has acted in the recent (2022) mini series The Tourist, alongside an international cast, not to mention ongoing roles in Neighbours including in its last-ever episode soon. The long list of her TV, theatre and film credits go on and on.

In terms of musical theatre, some of Maria Moutsidis’ roles include portraying Maria Callas, one of the most famous opera singers of the 20th century. Maria also shines in the play Taxithi, where (along with Helen Yiotis Patterson and Artemis Ioannides) the performers passionately act and sing their way into the incarnation of our mothers’ generation and their life stories.

Asking the dubious question – “which is her favourite performance to date?”, Maria tells me that it’s starring as the lead role in a lesser-known but poignant, independent film Dreams for Life in 2004.

“It took 5 years of work with the director Anna Kannava to develop the main character, Ellen, that I played,” Maria explains.

Dreams for Life was a labour of love for both Anna Kannava and Maria, in that their lives and ensuing experiences – as similarly aged Greek Australian women – resonated deeply within them on a personal apart from a professional, movie-making level.

Maria explains that she could relate to Ellen’s transference of her past with loves lived and lost, and its coinciding with her parents’ migration experience to Australia. The film successfully manages to portray such complex, sensitive and at times, subconscious issues on the screen, resulting in a beautiful and moving film.

Thanks to Greek Australian filmmaker Bill Masoulis’ promoting of the film on a pending website to be released later this year, Dreams for Life will be accessible to the public once again.

Parallels to Maria’s identification with her character in Dreams for Life, occur in all her roles, Maria points out: “When you’re a Greek Australian who’s trying to fit in, all those personal highs and lows cause me to empathise with my characters.”

She goes on to talk about the 2016 theatrical, musical production Taxithi and how it led her to relate deeply to the sacrifices our mothers’ made.

“Not only as a daughter who has over the years come to understand my mother in her role as ‘mother,’ but also as a woman with her own ‘baggage’ based on the migration experience and beyond,” Maria says.

“Taxithidi shows this as it portrays stories first hand of three women of our mothers’ generation who play five characters from the 50’s, 60’s and 70’s, interspersed with Greek music dealing with themes including migration, love, joy, loss but also pain.

“I have felt my own pain, my subsequent pent-up anger. I have sacrificed ambitions too, to keep the peace, like our mothers did to make a life in Australia.

“I could’ve been promoted as a singer in Greece, by the manager of a prominent Greek performer who was doing concerts in Australia. This was a long time ago when I was invited backstage with my now-deceased father for discussions.

“But I didn’t end up pursuing this Greece option, because a beloved boyfriend at the time forbade me. He was abusive in many ways, and wasn’t the only one, but I guess back then, I often equated abuse with love.”

In our candid interview, I realised Maria’s down to earth nature and life experience as a Greek Australian woman has many parallels with my own, and in hindsight perhaps with many of us regardless of gender.

This relating involves navigating our way through life in Australia as individuals, notwithstanding recognising and appreciating the influence of our parents’ Greek background on our personal journeys.

Hence during this interview, apart from exchanging some ‘heavier’ details of our life stories, we also talked about stuff like, ‘beauty tips’.

I comment on Maria’s glowing complexion and attribute it to her plant based diet, with her humbly responding: “A lot of it’s genetic,” while suggesting for my dry-tendency hair “try simple olive oil
and leave it overnight.”

Interviewer and interviewee’s ‘Greek Australian’ bonding aside, highlighting Maria’s honest and friendly nature, I enthusiastically absorb Maria’s philosophical outlook and personal views. These include accepting painful past relationships whether personal or professional (“this manager had been ripping me off for years and I didn’t know it then,” etc) as growing pains, while also voicing:

“My parents were strict like most of our parents, and I wasn’t allowed to have boyfriends, so when I got into abusive situations I really couldn’t gauge what was healthy and what wasn’t.”

Now in a long-term, healthy relationship as Maria confirms to me, I ask her: “How does Maria Moutsidis feel about herself now?” To which she pauses, and then somewhat playfully and smilingly adds, after again pausing and then rhythmically nodding her head a few times: “Still a work in progress.”

An amazing woman. Maria Moutsidis is a living goddess.