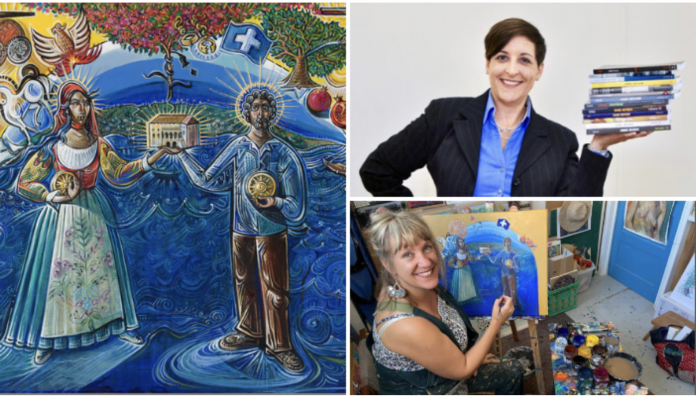 Drawn from her heritage and passionate about women in Greek history and culture, April commissioned Effie with an artwork and this is how a series of projects and global collaborations was set in action.

April Kalogeropoulos-Householder, talks to The Greek Herald about her initiative and her will to unearth more stories of women who – like Bouboulina – contributed to the Greek War of Independence.

Back in 2004 while I was a graduate student at the University of Maryland, I was working on a Ph.D. dissertation about Bouboulina and spent time in Spetses researching her life and making a documentary film about her. Now, I am turning that research into a book that will be out next year- the first book about Bouboulina in English.

Over the years, I became good friends with Philip Demertzis-Bouboulis, who was Bouboulina’s 5th generation grandson, and who founded the Bouboulina museum in 1991 in the family’s mansion. That friendship has grown to include Philip’s wife, Linda, and his son Pavlos, who now run the museum.

Throughout my research, I was desperate to discover the “true” Bouboulina- who she was, how she thought, what motivated her, and what she looked like. Since she did not leave a memoir, what we have are fragments of impressions created by those who came into contact with her- philhellenes from France, Britain, and the U.S. who had come to Greece to help in the War of Independence, a few documents written by her hand, family oral histories, and several portraits painted posthumously by European artists.

Many of the accounts contain contradictory information. Some say she was a ruthless war-monger, “so ugly that she had to seduce her lovers at pistol point.” Others reported that she was a beloved “Capetanissa”, strong-willed, with a sturdy physique and charming manner. It dawned on me that every single reference was made by male artists and historians who had their own personal, political, and patriarchal motivations for rendering her in those ways.

To celebrate the bicentennial of the revolution, I set out to find a female artist to commission a new portrait of Bouboulina to add to the historical cannon of images. I came across Effie in an Instagram post and was instantly drawn to her style. Her “Modern Icons” series, which utilizes elements of Byzantine iconography mixed with contemporary influences, was the perfect way to commemorate Bouboulina as a heroine of the Greek revolution and elevate her to the status of a saint.

With the passing of Philip in 2018, I thought that including him in the painting would tell the story of how he dedicated his life to founding the museum, and that the family could hang the painting in the museum and add Philip’s story to their live guided tours.

Effie painted the two figures holding the museum in their hands, as a reference to the icon of Constantine and Eleni, founders of the Greek Orthodox church. Effie’s painting is full of delicate touches- you get the feeling that it was made with a kind of love that flows from the divine feminine. And besides being an important historical contribution to Bouboulina’s story, it is also full of many layers of meaning for viewers to interpret.

The attention to detail is outstanding, and aesthetically it is simply breathtaking. Because of the pandemic, I will dedicate the painting to the museum next summer, along with an artist’s talk featuring Effie and one of my students who is animating the painting to bring it to life, and some other special events that will commemorate the 200th anniversary of the great Naval Battle of Spetses (September 8, 1822) at the annual Armata festival.

It was important to me to find an artist who had a connection to Greece, Greek art, and the Greek diaspora.

After my initial consultation with Effie, I knew that I had found the perfect person for the project. I have a background in the arts, and Effie and I talked for hours in that first meeting, about art history, Greek culture, and her approach, which is very collaborative. There is just something that Greeks of the diaspora share, that Effie and I also have in common, almost like an unspoken language… the pride in our heritage, the longing to return, the beauty of the Greek language. We instantly clicked as creative partners.

In terms of her style, many of Effie’s pieces spoke to me on a visual as well an emotional level.

Rather than realism, symbolism gives way to imagination, connection, and intricacy.

You will notice that the painting of Bouboulina is full of vitality- symbols of life overcoming death, pomegranate seeds, trees, broken chains. The energy contained in the painting is about Bouboulina as an eternal figure, and of Philip’s legacy, which is why the words ελευθερία and αιώνιος appear in the painting- a play on the famous phrase of the revolution, “Eλευθερία ή θάνατος”.

Women have always been written out of history, and with Greece, it is no exception.

How often do we hear about General Kolokotronis, but do not realize that Bouboulina worked side-by-side with him and they planned several battles together? Not only that, but she was his in-law, as her daughter, Eleni, was married to his son, Panos.

In the 1800s, families married for prestige and wealth, not love, so this is really saying something about her level of importance. Bouboulina moved in circles that included the most powerful people of the time- the Ottoman Sultan, and his mother, the Valide, Sultana; Tsar Alexander I and Ambassador Stroganoff of Russia; members of the Philiki Etaireia; and rebel priest, Papaflessas, who came to Spetses in 1818 to organize the revolt.

She did all of this at a time when women’s roles were confined to that of mother, wife, or concubine.  Women were not educated, did not have a voice in public life, and certainly no woman was permitted to take up arms and join in the revolution as a fighter. Oh, and by the way, at the outbreak of the war, she was 50 years old and the mother of ten children.

There were many other women who contributed to the revolution that we are just now learning about, such as Manto Mavorgenous, a wealthy woman from Mykonos; Domna Visvizi, from eastern Thrace and Mariyo Zarafopoula who was born and lived in Tatavla, a district of Istanbul.

There are definitely many other stories of women in this important part of history that we don’t yet know about that need to be unearthed. Some of my future projects will explore these stories, including another collaboration with Effie on an exhibition to be held in Adelaide later this year.

One thing about the pandemic is that it has normalized global collaborations through online relationships. A Greek-American working together with a Greek-Australian on a project for a museum run by a Greek-Brit to keep Greece’s past alive is a beautiful thing! What many people don’t realize is that even at the time of the revolution, Greece was a vast diaspora.

The inhabitants were comprised and influenced by many different cultures, including the Balkans, Anatolia, Venetian, and yes, Ottoman. Greek enlightenment thinkers like Adamantios Korais and Rigas Feraios were living abroad in places like Paris and Bucharest. Bouboulina herself was of Arvanite descent.

Greeks of the diaspora have a strong pull towards their heritage, and I’m proud to be part of that tradition.

The dedication at the end of my films says, “For my grandmother, Ourania. Thank you for making me Greek.” Greece has long been a source for my intellectual and spiritual interests. I first visited Spetses when I was six years old. The island is burned into my memories and my heart.

Researchers and artists, although they use different methods and create different products, fundamentally have the same purpose, which is to be good storytellers.

Effective researchers know how to paint a picture with words; good artists research and match their style to their subjects. Ultimately, both want to educate, spark emotions, and inspire change.

These are the goals of the museum, the painting, and my on-going research about women in Greek history.

Share
Facebook
Email
Twitter
Pinterest
Linkedin
WhatsApp
Viber
Print
Previous articleInsight or Perspective: How do you introduce a story to a child?
Next article‘Ancient Greeks’ exhibition set to tour Australia for the first time