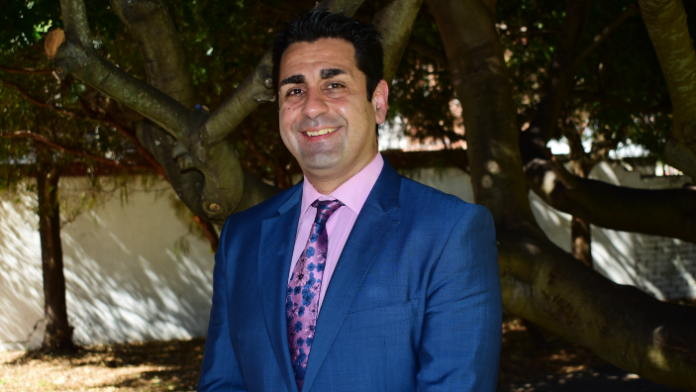 Since 2012, Councillor Harry Stavrinos has been serving the constituents of West Ward and the Greater Randwick community. Now, he is up for re-election at the upcoming local council elections in New South Wales on December 4.

As Cr Stavrinos hits the campaign trail, we sit down with him to discuss his political career and what his plans are if he is re-elected.

1. How did you get into politics?

In 2012, I was given the opportunity to run in the West Ward as part of the Randwick City Council and through hard work and determination, I was elected.

2. Does your Greek heritage influence your work?

Ancient Greece was the foundation of democracy and being of Greek heritage, I feel that it’s in our blood to fight for what’s right and to give a voice to the “silent majority.”

Common sense is not so common anymore and people are fed up with politicians who are motivated by their own self-interests and political agendas. My passion is to serve our community because nothing gives me more pleasure than hearing the words “thank you” after fighting for a cause or delivering infrastructure for the community.

3. What have you achieved so far as a Councillor?

Since being elected in 2012, I have delivered more than $20 million in major infrastructure projects not including footpaths, drainage, kerbs, gutters and playgrounds.

These projects include the $4.3 million Kensington Community Centre, the $2.5 million Meeks Street Plaza, the $13 million parking initiatives for Kingsford and Kensington, and the upgrading of playgrounds at Kensington Park, Kokoda Park and Fitzgerald Park.

4. What are your plans if you are re-elected this year?

If I’m re-elected in December, I have devised a 9-Point plan:

1) Fight for Grassroots Local Government Issues- Politics and factions shouldn’t play any role in Council and I will continue to focus on roads, rates and rubbish.

4) Continue to protect and fight for more green space.

5) Ease parking pressures on our streets.

6) Conduct more community consultation with my office in Kingsford being open to everyone.

5. What message do you have for our readers and the Greek Australian community more broadly?

There is no greater honour than to “serve your community” and to fight for what you believe in.

Politics and factions should play no role in local government and when voting on December 4th, look to support the person, not the major parties.

Greek Australians should look to support fellow Hellenes because if we remain united, we will never be defeated.

6. Is there anything else you would like to add?

‘A blow through corridors of power’: Elena Carapetis on her adaptation of Antigone