The struggle to recognise crimes against the Hellenes of Pontos, Asia Minor and Thrace continues 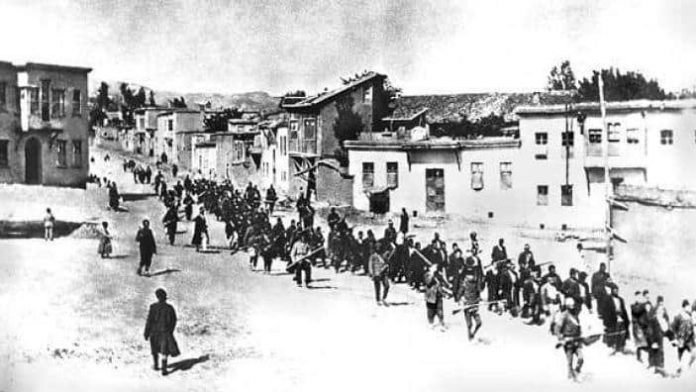 At the annual conference of the ‘Young Turk’ Party in Thessalonike in September 1910, delegates endorsed the plan to create a homogenous Turkish national state in Anatolia through the removal of the indigenous non-Muslim populations. In the first phase, through economic warfare. In the second phase, through various social and political pressures. In the third phase, through mass murder. The plan was later adapted by the rulers of Germany, led by Adolf Hitler.

Following the catastrophic – for the Ottoman Empire – Balkan Wars of 1912-1913, the plan of the ‘Young Turk’ Party was implemented. Firstly, in Thrace and Asia Minor. Amongst the deportees was a young Georgios Sepheriadis – better known as Nobel Laureate poet George Seferis.

The genocidal persecutions spread to western Pontos, to the districts of Kastamone, Baphra, Sinope, Neokaisareia and others. Few of the region’s indigenous Hellenes survived. Eastern Pontos was under Russian occupation from 1916 to late-1918.

In 1917, Captain E.H. Keeling (British Indian Army) was taken prisoner in Mesopotamia (modern Iraq) and imprisoned in Kastamone, 120 kilometres from the sea, where lived «some thousands of Greeks». As he later wrote in his memoir, «The number of Greeks was increased during our incarceration by deportations from the coast of the Black Sea, whence hundreds of men, women and children, barefooted, in rags, and with enormous bundles on their backs, were brought in under escort.» No reference to men amongst the deportees. [E. H. Keeling Adventures In Turkey And Russia 1924, page 49.]

The genocidal persecutions continued without pause until October 1918, when the Ottoman Empire collapsed and signed the Armistice of Moudros on Lemnos island.

On this day – 19 May 1919 – Colonel Mustafa Kemal (later known as «Ataturk») disembarked at the port of Amissos (Samsounta), Pontos. So began the second phase of the Genocide of the indigenous Hellenes of Pontos, Asia Minor and Thrace. 103 years later, Hellenism around the world honours those unjustly lost, the survivors and those who did not even have the opportunity to be born.

Genocide is a crime, defined in law. For genocide to have been committed, one of the following five criteria must have been met, according to international law, defined on 9 December 1948. [United Nations’ Convention on the Crime of Genocide]

The case of the Hellenes of Pontos, Asia Minor and Thrace meets all five criteria demanded by international law to be defined as «genocide». These were committed with the intention of the Turkish state to exterminate the Hellenes of the regions it controlled:

b. deportations of populations under conditions designed to bring about their deaths from dehydration, hunger and exhaustion, known as «white death» for its lack of bloodshed on marches to unknown destinations,

c. subjecting deportees to mental and physical harm with the intent to end their lives,

d. the Turkish state did not provide conditions necessary to sustain the lives of the deportees (water, food, shelter) and,

e. the Turkish state fostered the forced transfer of Hellene children and teenagers to Islamic institutions and to Muslim families with the intent to assimilate the underage Hellenes into the Turkish population.

According to international law, the indigenous Hellenes from the River Evros in the west to the Caucasus in the east were victims of the genocidal plan of the Turkish state from 1914.

During a media interview on Monday, Μay 4, 2020, President Recep Tayyip Erdogan declared: «We will not permit terrorist leftovers of the sword in our country to attempt to attempt to carry out [terrorist] activities. Their number has decreased a lot but they still exist.»

The phrase «leftovers of the sword» (kılıç artığı in Turkish) is a most derogatory reference to the indigenous Hellenic, Armenian and Assyrian populations of Pontos, Asia Minor and Thrace. It is a declaration of pride of the perpetrators of the three Genocides in the early 20th century.

As we have demonstrated in Australia, the histories of the Anzac and other Allied prisoners-of-war, those Australians and others who rescued survivors of the Genocides with their efforts, either in the Middle East or in Australia and New Zealand, with donations of monies, foodstuffs and clothing constitute part of the national histories of Australia and New Zealand. The same applies to every country in the world.

READ MORE: Greeks, Armenians and Assyrians join forces to March for Justice in Sydney and Melbourne.

Therefore, the history of the genocides of the Genocides of the indigenous Hellenes, Armenians and Assyrians of Pontos and other parts of Anatolia is incorporated in the national histories of other countries. This constitutes the main element of parliamentary recognition motions from state legislatures of Australia. With the incorporation of the history of the Genocides into national histories and into education systems of other countries, Australians and others become partners in the seeking justice for the victims of the Genocides.

The pressure on the Turkish state to recognise the Genocides of the indigenous populations of Thrace and Anatolia is beginning to bear fruit. The pressures are coming from the international community as well as from sections of Turkish society. This constitutes substantial internationalisation of the issue of the Genocides and of historic justice.

Eternal be their Memory.

I DO NOT FORGET – I REMEMBER – I DEMAND