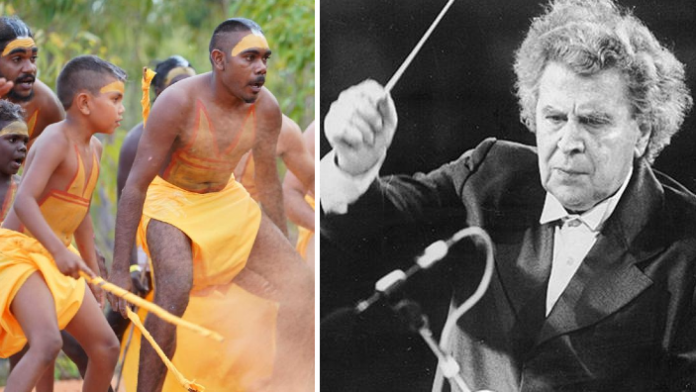 Everyone from the Greek diaspora will remember that iconic scene from the 1964 film, Zorba the Greek, where Alexis (Anthony Quinn) teached Basil (Alan Bates) how to dance the sirtaki on a Cretan beach.

Everyone will also remember who composed the music for that iconic scene – the legendary Mikis Theodorakis, who passed away last week at the age of 96.

This scene and Theodorakis himself hold an extra special place in the heart of Greek Australians, many of whom got to meet the man himself in 1972 when he toured Australia.

“Never before in the history of Greeks in Australia has there been such an immense and spontaneous popular excitation for the Greece of struggle, justice and beauty as has happened during the Theodorakis concerts,” The Communist Party of Australia said in a statement at the time, according to The Conversation.

A few years after his tour, Zorba becoming a mainstay at multicultural festivals such as Melborune’s Lonsdale Street Greek Festival, and other events like the Sydney Olympics and at the NRL’s multicultural round.

But according to The Conversation, the most famous rendition of the dance came from an unexpected source.

In 2007, a group of young Yolngu dancers from Elcho Island made global headlines. The Chooky Dancers (later renamed Djuki Mala) became famous when Frank Djirrimbilpilwuy uploaded a video of the men dancing in sync to a pop techno remix of Zorba.

As a way of saying thank you to a Greek friend named Liliane, the dance strengthened the relationship between Yolngu people and the Northern Territory’s Greek community.

The video went viral with Djuki Mala performing their hit on Australia’s Got Talent and touring Europe and the Middle East, including an invitation from Theodorakis’ family to dance in Athens.

If that’s not a clear example of the way Greek Australian culture has become firmly part of the fabric of modern Australia, we don’t know what is!