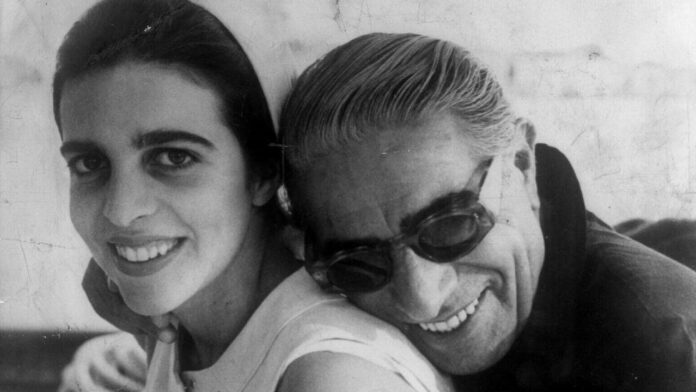 Christina Onassis was born on December 11, 1950, in New York City. She was the daughter of Greek-Argentine Aristotle Socrates Onassis, a shipping magnate who was one of the richest businessmen in the world. Aristotle’s success led to a life of riches for Christina from birth.

Christina and her older brother Alexander would live in Paris, Greece and England while growing up, both receiving a good education without the distraction of the media publicising her family’s darkest moment – when her parents split up in 1960.

News reports published stories of her father’s affair with opera singer Maria Callas, an affair Christina felt embarrassed by for the rest of her life.

Despite all her family’s controversies, Christina was a very successful businesswoman working for her father’s business, yet her way to the top was developed through family tragedy.

In 1973, her brother Alexander died in a plane crash while only a year later in 1974, her mother died of a heart attack. In 1975, Christina’s father also passed away. Christina lost all her family in only three short years.

Her own personal life, however, was also filled with controversy, with four failed marriages being the most notable public criticism.

In 1971, a 20-year-old Christina married her first husband, 47-year-old American builder Joseph Bolker. Her father disapproved of the marriage, which lasted just nine months. However, this became a blessing in disguise as this was the time when she made her first steps into the business, moving to Monaco to work as a secretary.

By 1975, Christina was married again, this time to Alexander Andreadis, which only lasted a year. She then married a Russian shipping agent between 1978 to 1979, Sergei Kauzov.

In 1984, Christina would become married a fourth time, this time to Thierry Roussel. They had one child together, Athina. The marriage unfortunately ended with divorce after her husband was caught cheating.

On November 19, 1988, Christina’s body was found by her maid in the bathtub of a mansion in Buenos Aires, where she had been staying.

An autopsy found no evidence of suicide, drug overdose or foul play, but found that Onassis had died of a heart attack caused by acute pulmonary edema. She was 37 years old.

Onassis willed her fortune, worth an estimated $250 million at the time of her death, to her only child, Athina. Raised in Switzerland by her father, Thierry Roussel, and his wife, Marianne “Gaby” Landhage, Athina gained control of half of the estate on her 18th birthday.