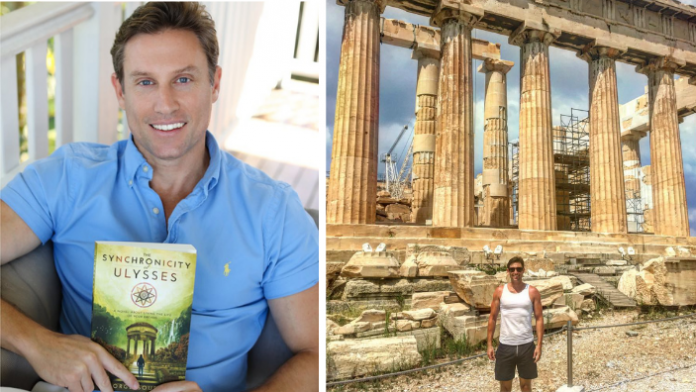 George Sourrys can’t help but let a laugh escape when I ask him how long it took to write his latest novel The Synchronicity of Ulysses.

“I decided around [2003] that I wanted to write the book. I probably even came up with the title back then. I just didn’t know what I was going to write. I didn’t have the wisdom to be able to write it. I’ve done a whole lot of searching since then.”

“You can say I’ve been working on it for 18 years but the actual writing was more like six-to-seven years.”

Sourrys is a writer, investor, and commercial model, but wants to be best known as a philosopher, he tells me. Or rather, a “backyard philosopher,” in his words.

“I remember I went and saw a guidance counselor who said, ‘Oh, don’t do philosophy. You’ll never get a job out of that,” he says.

George Sourrys grew up in the “outback desert climate” of Mount Isa, north-west of Queensland, and says he wasn’t out-and-proud about being half-Kytherian in “the middle of nowhere”.

“As a child, for some reason, I just wanted to be like everyone else and be Australian, even though I was born in Australia,” he says.

“It took me a while to realise the power that comes with being Greek.”

Sourrys later moved with his family to attend boarding school in Brisbane but it wasn’t until a trip to Greece when he was 16, and later 28, that he began embracing his heritage.

“I felt myself to be, at that time, a kind of searcher of secrete knowledge,” he says.

It’s hard not to notice the parallels between Sourrys and Ulysses, the protagonist in his novel: both are wisdom seekers inspired by the philosophers of ancient Greece.

“There are definitely elements of myself in quite a few of the characters.”

“[Ulysses’] journey is similar to my journey,” of course without the “fantastical” aspects, Sourrys says, but it’s his philosophies that form the basis of his novel.

“That’s my lesson in the book: the world is an amazing place… all the beauty you’re looking for is all around you, you just have to open your eyes to it.”

The Synchronicity of Ulysses is available in book stores and online.