A different migrant story: The Girl from the Ashes and her gilded life in Australia 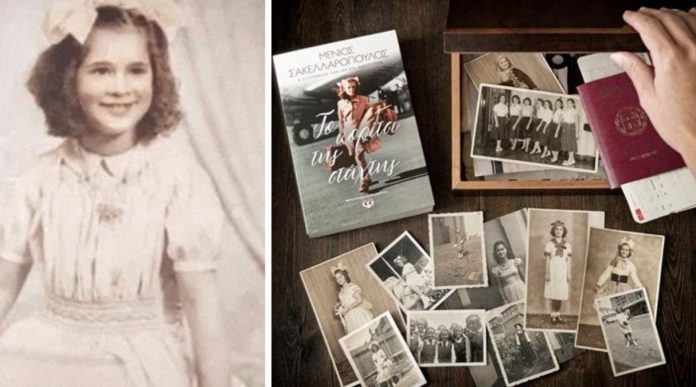 All Greek migrants to Australia have unique stories, which in their own way, vary. Ms Paraskevi (aka Vivian) Stefanou’s life has been documented in a book in Greek, titled: ‘To Koritsi tis Stahtis’ (The girl from the Ashes), published in October 2021 by author Manos Sakellaropoulos.

The book describes Vivian’s life, from childhood to the present. Its narration extols her good fortune, which stems from her luck and personal strength, but also from her introduction to Australia and subsequent support there.

Ms Vivian Stefanou witnessed and survived the 1943 Kalavryta Holocaust enacted upon her townspeople, by the German occupying forces. This included the murder of her father – among the 700 or so men shot dead by the Nazis.

The book tells of two female representatives of the Greek Orthodox Church, approaching Vivian’s mother, amongst others, a few years later. They were seeking a child to be adopted out to a prosperous Greek, childless couple in Australia.

The young Vivian enthusiastically volunteered to go, much to her mother’s distress who later concluded it would be best for her daughter’s future.

Her adoptive parents was well-off. The book describes this being due to her adoptive father writing articles for various newspapers, as well as being the President of the Greek-Australian Association in Sydney. His real financial windfall though, were his popular small chocolates, wrapped in a Greek flag design.

Vivian’s passage to Australia was via aircraft. Upon landing in Sydney, there was a cadre of press and populace, waving little Greek flags, awaiting the 9 year old Vivian, (article below wrongly states her age as 11), referred to as the ‘Greek war orphan’.

Upon meeting her adoptive parents and eventually settling into her new home, (which the young Vivian likened to a palace), a private tutor was commissioned to teach her English, before her parents enrolled her into a private Catholic school run by nuns.

Vivian testifies that her education there was a wonderful experience, and that the nuns didn’t mind her doing her cross the Greek way. She was further impressed by the school’s beautiful, natural environment surrounded by trees; by its large sports grounds and canteen with 4 chefs.

Her schooling there, led her to University where she studied Business Administration, before being employed at the Commonwealth Bank. The book tells of her success there involving hard work, whereby she also brought the bank much new business from the Greek community.

Many years later, in 1961, upon her adoptive mother’s premature death from illness, Vivian and her father embarked on a trip to Greece. This time they travelled by ship, on ‘the Patris’, and due to her father’s financial status, they travelled first class. Vivian was told by the ship’s staff to avoid the 2 nd class lower deck area, due to the bad smell and overcrowding.

Deciding to venture there anyway, Vivian met a sad, young woman whose story was one of migrating to Australia at 17. She had been forced by her mother to marry a man in Australia. she had only seen in a photo; a way many poor, young women ‘Greek brides‘, migrated to Australia, though for most it was a positive experience.

In Australia, this girl encountered a 60 year old alcoholic who abused her sexually, and in every other way, using her as his servant. The journey this time, on the same ship as Vivian, was a return to Greece after that horrific migration experience in Australia from which she ran away.

Meeting this young vicitmised woman, the book tells, made Vivian even more adamant to help her fellow Greek Australians. After arriving in Greece, Vivian then 24 years of age, eventually decided to stay. She was employed at the Australian embassy in Athens where she met her husband, a civil engineer there on business.

This led to a contented marriage, followed by many years in London with her husband; with both of them in professional capacities (Vivian at the Australian High Commission there), before returning permanently to Greece. To honour her devastating childhood, her husband even had a holiday house built in Kalavryta.

Vivian, with two young children at that time, decided to stay at home as a full-time mother, while becoming the President of a Greek Australian Association in Greece.

The book describes her feelings of gratitude, and stresses that even beyond her horrific experiences as a child in Kalavryta, life hadn’t always been a smooth ride, such as when she lost her husband a few years ago. Her story resonates with how important it is to her to be of service to others, considering it her debt and honour to help other Greek-Australians.

Thankful to Australia for granting her the opportunity and foundations for a successful life, after a devastated childhood in Kalavryta, Ms Vivian Stefanou’s words of wisdom (amongst many) to the author, include the importance of coming from a place of love, always. And regardless of how many times you fall, you must always get up.

Wise words, coming from a woman now in her 80’s whose life is a testament to resilience and gratitude.