Annita Demetriou: ‘Cypriot Australians are precious ambassadors of our country’ 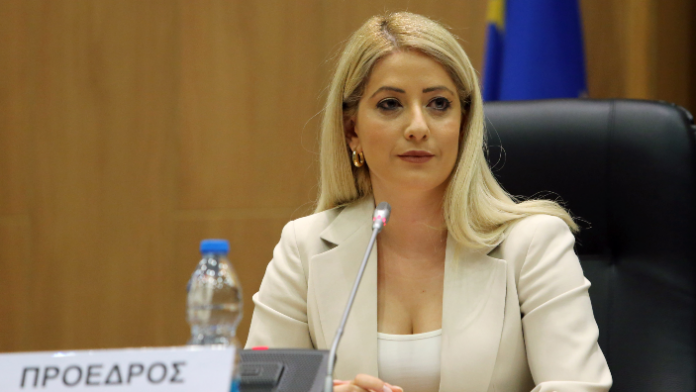 Annita Demetriou gives off a sense of confidence with her speech. Her ascent to the second post of the Republic of Cyprus, that of the Speaker of the House of Representatives, was a surprise, which is “frayed” as one hears her speak with her flowing, solid speech, dotted with substance and free from anything superfluous.

In societies such as the Cypriot one, which resembles the Greek, there is a strong element of patriarchy, which is a deterrent to the evolution of a woman. Ms Demetriou, who speaks exclusively to The Greek Herald, managed to lift herself over obstacles, overcome the decay of everyday life and now lead the Cypriot Parliament.

To lead, at the same time, through her example and give birth to the hope in many women that despite the fact that our societies are scattered with obstacles for them, there is a way to overcome them as long as you try “three and four times more,” as she characteristically tells us.

In October 2021, she celebrated her 36th birthday. In this short life she managed to study political science, to present the news bulletin of a private television station and today she is in one of the highest offices of the political life of Cyprus looking for solutions to improve the everyday life of citizens.

Annita Demetriou completes in a few weeks, half a year in the position of Speaker of the House of Representatives and as she tells us: “the big bet remains to win as an institution the trust of the citizens and regain our lost credibility. To dispel any shadows that have been created and to invest in light, with processes of absolute transparency.

“To listen to the concerns of the citizens in the difficult situations we are experiencing and to provide solutions to dead ends through the legislative work.

“Modernisation and a change of mentality through digital transformation, sustainable development and the green transition is also a one-way street for the House of Representatives and for the whole society. But also for any society.

“With reforms we aim to break free from anachronistic tactics and build bridges of communication with the world, creating a two-way relationship with the citizen, which will lead to participatory democracy.”

Concern for Turkey and the plague of Cyprus:

The provocations from Turkey are constant and are a cause for concern for the Speaker of the House of Representatives. “As long as Turkey acts as an unpredictable and destabilising player in the Eastern Mediterranean region, and beyond, all open issues pose risks.

“It is for this reason that we must step up our efforts and insist on the resumption of a meaningful dialogue within the UN with a view to the overall settlement of the Cyprus issue, on the basis of the resolutions of the Security Council and the principles and values on which the European Union was built.

“The solution of a bi-zonal bi-communal federation is a one-way street and the exemption from foreign occupation troops and the anachronistic system of guarantees is necessary, for a peaceful, safe and sustainable rule of law that creates conditions of security and prosperity for all the inhabitants of the island.

“We are very concerned about the illegal actions and the new fait accompli that Turkey is attempting, especially in Famagusta, Karpasia and the AOZ, but we have no choice but to stick to our positions of principles and legality, for the future that we must ensure for our Cyprus.”

The Cyprus issue remains the Great Plague of Hellenism. Is there a solution on the horizon?

“We do not have the luxury of complacency and above all idleness especially with what is constantly being attempted by Turkey. We should therefore, despite the increasing Turkish intransigence, continue tirelessly with the efforts, utilising all political and diplomatic means, with the aim of preventing Ankara’s methods of diverting from the agreed solution basis. Partition cannot be the fate of this place and we can never come to terms with the encroachment on human rights.

“The House of Representatives has a decisive role to play in this, through parliamentary diplomacy. Equally important, however, is the role of our diaspora. Both by influencing decision-making centres and by informing and enlightening initiatives. We rely on our Greek Cypriots abroad.”

The pandemic and the obstacles for a woman in politics:

Ms Demetriou has only good words to say about the treatment of Cypriots throughout the restrictive measures of the pandemic.

“The people of Cyprus from the first moment showed a high sense of responsibility and altruism in dealing with the pandemic. We must acknowledge that the citizens, despite all difficulties, complied with the restrictive measures by showing patience and prudence. Indicative is the high vaccination rate in our country, which exceeded 80%. And so we must continue to move forward united without extremes and divisions,” she says.

Annita Demetriou became the first woman to rise to the Office of Speaker of the House of Representatives in a strongly patriarchal society, such as that of Cyprus. Her struggle seemed at times like Sisyphus’.

“It is double, triple perhaps and quadruple I would say the effort and struggle for every woman to prove that she is equally worth it, especially in male-dominated spaces and male-dominated societies. She has to fight and break stereotypical perceptions. To confront watertight and biased attitudes maintained over decades, preserving gendered discrimination and undermining the abilities and value of the female gender.

“Certainly steps have been taken in recent years to establish and strengthen the position of women in decision-making processes, and as such they can be noted, but there is still more to be done: indicative is the sexism law, the adoption of which is a pioneer step among the countries of the E.U., the discussion of the proposal for a law to make the offense of femicide an idiom and to carry a life sentence, but also the ratification of all the provisions of the Istanbul Convention in legislation, with a monitoring and evaluation process.

“Only with dynamic and effective policies, but also the systematic cultivation of empathy through education, can we truly shape the culture we are entitled to, a culture of full adoption and establishment of respect for human rights, giving equal opportunities to each individual person.”

Finally, Ms Demetriou sends a message to the Cypriots of Australia through The Greek Herald.

“Diaspora is the most authentic and vibrant part of Hellenism. This is because among the Greeks of the diaspora there is “nostos”. In a broader sense of nostalgia for the motherland that goes beyond the simple and everyday things. So they know how to keep the homeland in their hearts well guarded, as a treasure, and this is the first thing we realise whenever we visit Australia and other countries of the world,” she says.

“The Cypriot community of Australia, with its progress and multifarious action, has become a valuable ambassador of our country abroad and we are grateful for this.

“We must not for a moment stop standing up for the rights of our people and denouncing the brutal encroachment on human rights in our country, from every international odium. And we thank for this our diaspora in Australia and our foreign nationals who defend their small homeland in all the lengths and widths of the planet. Our Cyprus.”