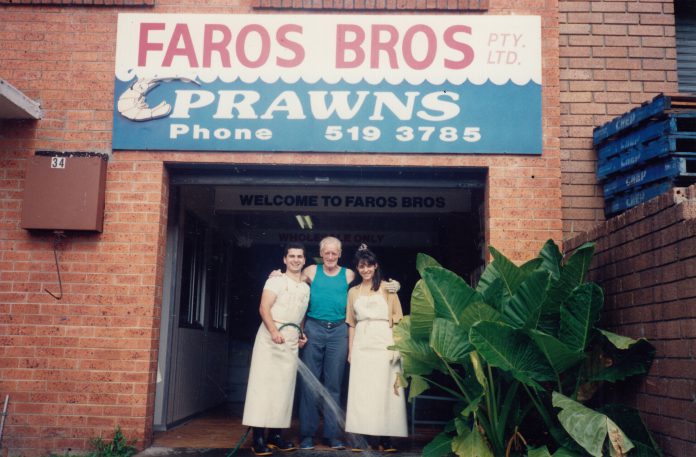 Across Marrickville’s industrial area, we come across Greek businesses whose longevity, success and growth have played a significant role in servicing the community. Years and years may pass, yet these businesses seem to always be there; the Bananis family have been operating Faros Bros Seafood in Buckly Street for over fifty years. Can we remember them not being there?

The Faros Bros story, however, goes even further back; Having run a fish and chips shop in Kingsgrove for a couple years, George and Dorothea Bananis then set up a small operation of oyster shucking in their rear garage of their Marrickville home. It was in 1969 that George and Dorothea bought an old wooden house on Buckley Street, Marrickville, and established Faros Bros Oysters; back then, Buckley Street was both residential and industrial, so the Bananis family lived in their house and had their small oyster shucking operation in the rear garage.

How George came up with the business name was he was reading a local Greek newspaper and there was a pencil etching of a lighthouse and this inspired him to use the Greek word, φάρος, which translates as ‘lighthouse’ for his business. As George explains, ‘Lighthouses are so important for shipping and large fishing trawlers. Lighthouses help bring back fishermen safely to shore.’

Like so many Greek migrant families struggling to get ahead in their adopted homeland, it was a tough balancing act between bringing up their three young children, Anastasia, Thalia and Pandelis, and keeping up with the demand for their oysters. The daily routine was to pick up the oysters very early in the morning from Sydney Fish Markets, open them up in the garage and then make all the deliveries to various clubs and restaurants. And there were even their children’s pick ups from school!

In the mid 1970s, the family moved to Earlwood while still maintaining the old wooden house as their business; in 1983, this house was finally demolished and a shop and factory, with a small freezer in the rear, was built. All the Bananis children worked in the family business during busy periods of the year; it was also in 1983 that, as a young sixteen-year-old, Pandelis, joined the business on a full time basis.

Back then, most of Faros Bros’ oyster shuckers were Greek; with Marrickville’s changing demographics in the late 1980s, many employees were from Vietnam and other Asian countries.

While George partnered with Arthur Athanassiades to run the Blue Marlin seafood restaurant in Sydney city for a couple of years in the mid 1980s, Dorothea and Pandelis continued working Faros. As customers began asking for other seafood, Pandelis initiated expanding the range of seafood offered to them. As Pandelis points out, ‘Customers would come into our shop and ask for seafood we did not have. Witnessing a demand for this seafood prompted us to introduce it. Our range just grew and grew.’

What attracted, and subsequently maintained, their customers was Faros’ balance between reasonable prices and fresh seafood, and their reputation grew and grew from there.

After eleven years of meticulous planning and hard work, Pandelis’ vision of a much larger and modern operation was realised when Faros Bros Seafood moved across the road- where the historic Attiki Yoghurt used to be.

Asked about what Buckley Street means to him, ‘It is such an important part of my life; so much of my time was spent here- this is where I grew up! As we worked such long hours, we spent more time at Faros’ premises than our own house(s). So, Buckley Street is like our home.

‘We outgrew our old premises, so we are very fortunate that we found our new premises, only across the road. We are lucky that our strong connection to Buckley Street and Marrickville was maintained!’